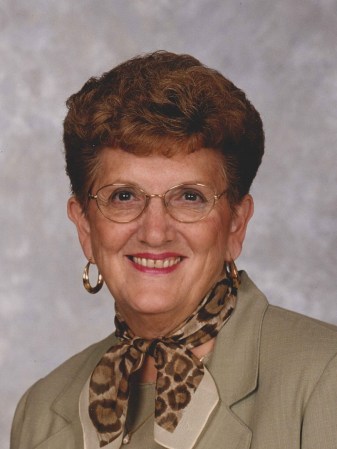 Patricia (Pat) Ann Swenson died April 18, 2022 at 6:35AM. She was born July 12, 1933 to Frank and Mary (Van Alstyne) Estlick in Bennington Township, Mower County, Minnesota. She was fifth of six children. Their family moved to LeRoy when she was 18 months. She attended school there, graduating with the class of 1951.

Pat moved to Austin in February 1952 to accept a position in the office of Mier Wolf & Sons, now Bricks. That same year in June, she married Raymond M. Swenson. Their family was completed with the birth of their two children: Bob in 1954 and Robin in 1958.They were married nearly 47 years when Ray died unexpectedly in April 1999 of cardiac arrest.

After being a stay-at-home Mom for a few years, Pat began working part-time at the Kenwood Park Grocery Store. She also supplied their customers with delicious home-made pies, cakes, cookies and lefse for about 15 years. When the store became Ankeny Mini Mart, she stayed on as manager. In 1974 she made a career change when she became an employee of Home Federal Savings Bank. She worked there nearly 21 years, retiring in 1995 as Teller Supervisor.

As her children grew, she kept busy with their activities. She was both a Cub Scout and Brownie leader. Her Brownie Troop was the largest ever in Austin at that time. In their teenage years, both children were active in 4-H and participants in horse shows. She spent many weekends at the competitions cheering them on!

Pat was a charter member of St. Edward Catholic Church, serving on the Pastoral Council for three years, including one year as president. She volunteered often in the early years of the parish, making pies for big dinners, bake sales, etc. In later years, she enjoyed working in the hospitality area, serving at weddings and other occasions, until health issues intervened.

Pat always had a warm affection for Austin and St. Edward Catholic Church. After living there for 63 years, health problems necessitated a move to Meadow Lakes Senior Living in Rochester.

In her leisure time, her favorite activities were reading, watching Jeopardy, playing Scrabble and Bridge and travel. She and Ray enjoyed many trips together, both in the USA and abroad. She continued this educational and enjoyable hobby after his death. They always looked forward to their winter vacations in Florida, spent at Pompano Beach since 1984. Pat continued that as long as possible. They especially enjoyed the years when children, spouses and grandchildren joined them at the beach. They made some very dear friends there.

Faith, Family and Friends – these were most important in Pat’s life. She truly valued her friends, especially appreciating the support they gave her after Ray’s death. She always tried to be a good friend, Mom and Grandma, striving to live a life reflecting her Christian beliefs and values and her love for them. A family tradition that was carried on for many years and very special to her was baking and decorating birthday cakes for each of her loved ones. She was always interested in the lives of her children and grandchildren, speaking on the phone with all of them. Whenever possible she attended school and church functions for them as well as sporting events involving the grandchildren. She loved her family very much.

Pat was a mother, grandmother, strong in her faith and dedicated to her family. We celebrate her kindness, her love for her family, her beautiful smile. We all adored her with all our hearts. She will be truly missed by her entire family and friends. We will treasure our memories of our time together.

She was preceded in death by her husband, parents, Frank and Mary, siblings, Clyde Estlick, Juanita Anderson, Dorothy Orke, Naomi Carter, Jerry Estlick and their spouses.

Survivors include son, Robert and his wife, Janet; their children and spouses Shelby and Jim Strain, Kyle and Kathryn Swenson, Tyler and Megan Swenson; daughter, Robin and her husband, Dave Turner, their sons Jesse and Brandon Turner; great grandchildren, Kyson and Bowen Strain, Ryann Swenson, Ruth and Rex Swenson; and many very special nieces and nephews.

A Mass of Christian Burial will be celebrated at 11:00 am on Monday, April 25th at St. Edward Catholic Church in Austin with Father Jim Steffes officiating. Interment will be in Oakwood Cemetery. Visitation will be held at Clasen-Jordan Mortuary on Sunday, April 24th from 4 to 6 pm, and will continue on Monday morning at the church for one hour prior to Mass.