Part of a community 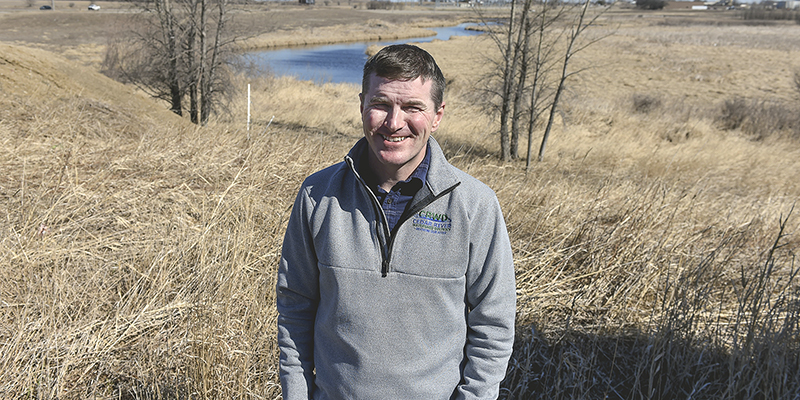 After 18 years with the Mower County Soil & Water Conservation District, Justin Hanson is taking a new position with a state organization starting in early May. Eric Johnson/photodesk@austindailyherald.com

In 2003, Justin Hanson was at a conference and listening to a speech by then Mower County Soil & Watershed Conservation District Manager Bev Nordby.

She had been named Employee of the Year and the speech she gave resounded in Hanson, who remembers it to this day.

“I remember like it was yesterday, listening to her talk so passionately about the work this place was doing,” Hanson said. “That stuck with me. The next year they had an opening for a resource specialist. I wanted to be a part of that.”

Now, after 18 years with the SWCD, Hanson is ready to take that next step. On May 9 he will start a new position as assistant director for Field Operations with the Board of Water and Soil Resources.

“Essentially what I’ll be doing is I’ll be talking about the same grants we’re working on and I’ll just be more on the policy end and statewide,” Hanson said. “I’ll be involved in setting that direction and ideas and side boards you need for policy.”

Hanson was a resource specialist with the SWCD from 2004 to 2015, when he took over the district manager position from Nordby.

In those 18 years, Hanson has had a front row seat to an SWCD that has grown into one of the most respected SWCD’s in the State of Minnesota. Just this year the Mower SWCD was recognized by the Minnesota Association of Soil & Water Conservation Districts (MASWCD) with its SWCD of the Year award.

“There was something special about his job,” Hanson said, as he once again looked back to the beginning. “It was a great opportunity. Bev let me chase down grants and do things that maybe were outside of my job description and let me grow into this position.”

Under Hanson’s leadership, the SWCD became part of a broad partnership and in some ways a community family in terms of developing conservation to the county. 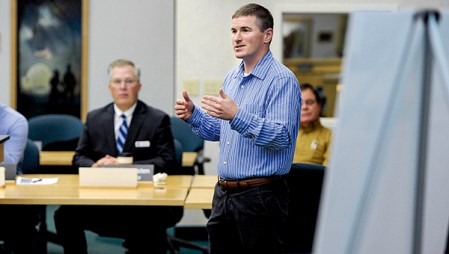 Justin Hanson, Soil and Water Conservation District manager, begins his presentation for members of the Minnesota House Bonding Committee in the City Council chambers in October 2015, the same year he took over as district manager. Herald file photo

It’s developed several programs and completed several projects that have been put toward bettering land usage and water quality.

One of those major projects was a flood mitigation project along Dobbins Creek, which required the cooperative work of county, city and local landowners in order to help ease flood concerns upriver before rising waters became a problem for Austin and other communities.

It was a lofty and long project to bring to fruition.

“That was a project we identified when the watershed district was formed,” Hanson said. “That was the one we struggled with. We started working on that years and years ago and that’s been kind of the pilot project.”

“There were so many problems and issues as you’re figuring it out,” he continued. “That thing probably could have been dead on the table a couple of different times. We were just able to keep it up in the air long enough to get the pieces together and get it done.”

The foundation that allowed for the project’s completion was the partnerships the SWCD helped forge along the way. Relationships that required trust among community and landowner viewpoints.

“I think that’s been a big part of it,” Hanson said. “We have a community that embraces this work. I said before and I can’t find an example of where it’s wrong: The programs and opportunities we kick out locally here, not everybody has success because they don’t have the people who want to cooperate back. We just have a different culture here. Farmers and the community who buy into this. They’re unique.”

Minnesota’s somewhat contested buffer law, was pushed extensively by former Gov. Mark Dayton and required landowners to leave perennial vegetative buffers of up to 50 feet along lakes, rivers, and streams and buffers of 16.5 feet along ditches.

While some actively pushed against the law, Mower County was among the counties to be ahead of the curve and that was largely due to partnerships with the SWCD.

“It sounded so much worse than it was because our farmers were doing great things,” Hanson said. “It was just a matter of shoring up some key areas. There was a couple cases where things kind of blew up early on, but we got good commitment from the staff to kind of make sure we’re meeting those folks where they are.”

Hanson credits the work the SWCD has been able to do over the years to the staff that work within  the SWCD.

It’s because of the employees under Hanson, who have been willing to take up the extra work, that the SWCD has been able to mark success after success in its conservation efforts.

“We’ve got amazing people,” Hanson said, lauding the staff. “We’ve been able to keep them, which helps a ton because we’ve never had any drama, never ever any jealousy. In fact, the people out there will take on extra work at the drop of a hat if it means you’re helping out one of your co-workers.

At the end of the day Hanson feels good about the SWCD and his place within it.

At the same time, he’s excited to see where the SWCD goes from here.

“I like the challenges we have here, but I also think these guys in the room have earned the right to execute their vision and do things a little differently,” Hanson said. “They’ve been a great staff, supporting me and letting me lead. I’m really excited to see what direction they take when I get out of their way a little bit.”