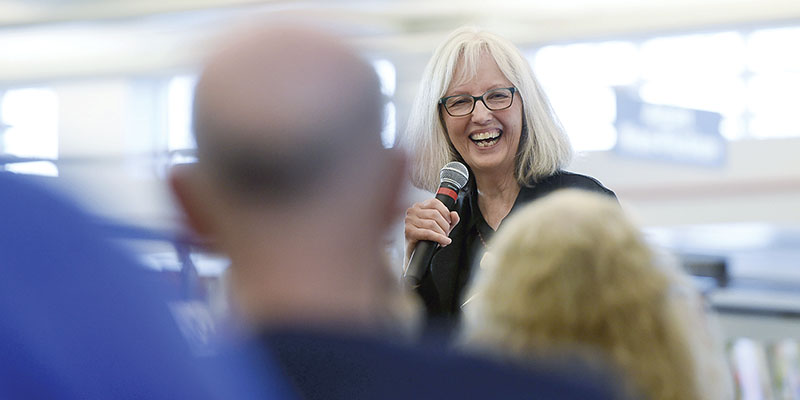 At its heart, “The Seed Keeper,” by Minnesota author Diane Wilson can be seen as a story about a journey and discovery.

The second book and first fiction book by Wilson, the story follows the novel’s main character Rosalie Iron Wing as she discovers the roots of her people — both through history and through the plants she grows in her garden.

It’s an overly simplified synopsis of her book, but it reflects Wilson’s own life as a member of the Dakota people and those traditions that have been carried through the years.

Wilson talked about these elements, among other things during a presentation Thursday night at the Austin Public Library as part of the Page Turners City-Wide read.

Wilson was in town throughout the day Thursday attending a variety of events that included a writers workshop and a presentation on the Chert Historical Restoration at the Chert Quarry near Grand Meadow.

“It’s been fantastic,” Wilson said prior to her discussion Thursday night. “The hospitality is so warm down here and then being invited to the historical society presentation and then just to be present at it and get to listen to two speakers talk on topics that were absolutely fascinating. That was such a gift.”

Wilson’s work on “The Seed Keeper” was 10 years in the making and reflected all the time she has spent on relating her own experiences and those experiences she’s learned through the process of writing.

With that perspective, Wilson said that to have a community embrace it as Austin has becomes a meaningful part of the experience.

“When writers are working on a book, we work on them for years by yourself, all alone, hoping one day it will get published and someone will read it,” Wilson said. “There’s all the things you care about put into that book that you hope other people care about. When a community actually selects your book to read because it is appreciated and then get to come down and have a conversation with people who have read the book and really want to understand more … that to me is a big gift.”

Author Diane Wilson reads a segment from her book “The Seed Keeper,” Thursday night during her presentation at the Austin Public Library as part of the annual Page Turners City-Wide Read. Eric Johnson/photodesk@austindailyherald.com

In writing the book, Wilson relied heavily not only on the experiences of her own family, who along with Wilson are enrolled in the Rosebud Indian Reservation, but those of Native American elders. She also pulled from traditions and stories that had been handed down through the years. This included the tradition of native people sewing traditional seeds into the hems of their clothes or carrying them in their pockets, which connects directly to the men, women and children who were forced to march in 125 miles to Fort Snelling in 1862 during the Dakota War, a walk that’s still walked today in order to remember the ordeal.

The whole process has left an impression on Wilson.

“I worked with indigenous seeds for the past 20 years and I continue to write and garden and work for native nonprofits and so this book was my way of bringing all of that experience together,” Wilson said. “As a gardener you just kind of fall in love with your plants and seeds in particular. This book was my way of giving back.”

It also allowed Wilson to connect with planets in general through the teachings of the native culture and a people who put so much stock in the plant being part of the one world, not just for human consumption.

“Having done this work in different forms over 20 years, I think for me it was to deepen that understanding and put it together in a story,” Wilson said. “And what has been a surprise for me, because you never know with a book,  is how many people have responded to it.”

“I think there is a hunger for reconnection to plants and seeds that we get through gardening,” Wilson continued. “There are so many ways our cultures move away from that relationship. We don’t have to garden, but when we do we nurture that relationship we get so much back out of it. For me it was deepening my own understanding of what I’ve learned and then sharing.”

“The Seed Keeper,” is available at the Austin Public Library and Sweet Reads.