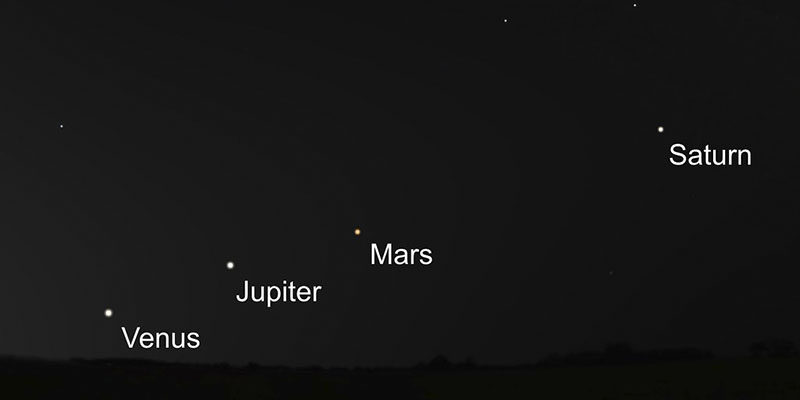 May opens with the two brightest planets low and close together in the eastern morning sky. Jupiter will be just above brilliant Venus, in the act of passing it en route to a rendezvous with Mars.

The Red Planet will be glimmering to the upper right of the pair. Jupiter rapidly closes in on Mars and catches it on the 29th, when it will appear close above Mars. 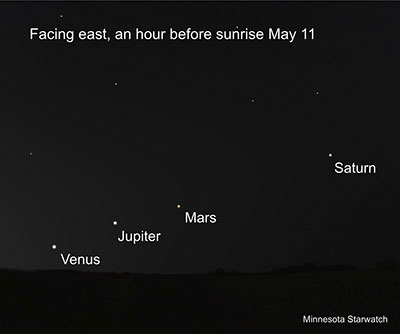 Jupiter continues along the same path toward Saturn, but the ringed planet moves steadily westward, away from Jupiter, too fast to catch. That’s because Saturn, the most distant from the sun of the three bright outer planets, orbits most slowly. Thus, Earth’s orbital motion pushes it most rapidly westward across the sky. Mars, being the closest and speediest of the three, resists the push and lingers in the eastern sky the longest.

To see the planets, try to get outside just before the sky starts to lighten.

In the evening sky, Leo, the lion, is high in the south at nightfall on May Day. The brilliant star in the southeast is Arcturus, in kite-shaped Bootes, the herdsman. Below and slightly west of Arcturus is Spica, the brightest star in Virgo, the maiden. All these stars move westward as the hour and the calendar move forward.

May’s full moon treats us to a total lunar eclipse the night of the 15th-16th. The eclipse begins at 9:27 p.m. May 15, when the moon first contacts Earth’s umbra—the inner part of its shadow, where the sun is completely blocked. Totality lasts from 10:29 p.m. to 11:53 p.m. The moon is deepest within the umbra at 11:11 p.m. After totality ends, the moon will be partially eclipsed again until 12:55 a.m. May 16. Let’s hope for clear weather that night.