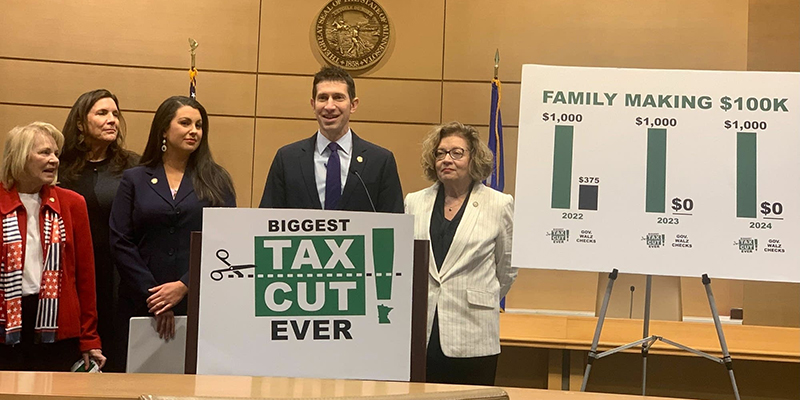 The Minnesota Senate passed the keystone of the Republican plan for the state’s projected $9.25 billion surplus – a tax bill that would cut income taxes by $3 billion this year and at least $2.5 billion each year after.

Senate Majority Leader Jeremy Miller, R-Winona, leaned on a well-worn mantra as he described the goal of the bill, which passed by a 42-24 vote, with six DFLers crossing over to join all Republicans.

“To put more money in the pockets of working Minnesotans, every single paycheck, week after week, month after month, year after year,” Miller said.

“Taglines don’t solve problems. Let’s come to the table with real solutions and not fake fixes,” said Senate Minority Leader Melisa Lopez Franzen, DFL-Edina. She described it as a risky plan that could come back to haunt the state.

The bill takes a cleaver to the bottom income tax rate – dropping it from 5.35 percent now to 2.8 percent. It applies to the rate assessed on roughly the first $40,000 joint filers earn and about the first $25,000 in taxable income for singles.

Senate Taxes Committee Chair Carla Nelson, R-Rochester, argued that Minnesota is an outlier because its lowest rate tops the highest tax rate of many states.

“This is a small step to right the ship, to support hardworking Minnesotans and to make our state a bit more competitive, and to encourage innovation, growth and economic expansion in our state,” Nelson said.

The other big piece of the plan would exempt all Social Security income from taxation. A change like that would align Minnesota with most states, but it would also deliver the most money to people with annual earnings above six figures because most people receiving those benefits already don’t pay taxes on them.

Democrats see the plan as a recipe for disaster.

“Another Legislature is going to come back next January and face the music of whatever decisions that we’re making now,” said Sen. Erin Murphy, DFL-St. Paul. “And I think the Republican majority is spending money like teenagers who have just earned their first paycheck.”

“If you were a Minnesotan who had hoped we would use this historic surplus to address climate change, to rebuild our schools after these difficult couple of years, to address the housing crisis and get homeless people into safe places,” Klein said. “If you were hopeful that we would finally reward our heroes and our frontline workers, you will be disappointed in this bill.”

An analysis from nonpartisan staff shows that 75 percent of taxpayers would benefit from the income tax rate cut, at an average of $759 per year. Those with higher incomes generally fare better in dollar terms. The Social Security tax change would award the biggest savings to upper earners.

“The surplus is spent and much of it on very affluent people,” he said.

Republicans argued that tacking more money onto state-supported programs isn’t the answer. Sen. Julia Coleman, R-Waconia, said families need a break as they cope with rising costs of almost every essential item, from groceries to gas to heating bills.

The Senate plan isn’t the only one in play at the Capitol. DFL Gov. Tim Walz has proposed expanded education and family care credits along with a one-time rebate that would send up to $1,000 to 2.7 million households.

Sen. Ann Rest, DFL-New Hope, tried to put those $2 billion in rebates in place of the Republican-backed bill, but the Senate rejected the move.

House Democrats have proposed a tax plan one-third the size of the Senate’s that would deliver money through income-based credits, existing property tax aid programs and a smaller-scale rebate.

Lawmakers are a day away from starting a week-long break. When they return, they’ll have about a month left to fit the pieces together before shifting focus to an election that will determine the Capitol power structure in 2023.

At a press conference ahead of the Senate bill’s passage, Miller wouldn’t say whether a permanent income tax rate cut was imperative for striking a deal.

“I think it’s too early to answer that question,” Miller said. “Republicans are open to any ideas to put more money back in the pockets of Minnesotans.”