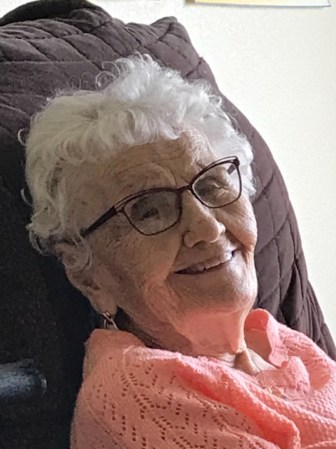 Marian Esther Benson passed away peacefully at her home on March 24th, 2022 with her daughter, Marilee at her side.

Marian was born on January 4, 1917 at home on the farm near Schaller, Iowa to Asa and Amelia Currie.

After graduation from high school, she obtained a teaching certificate from Buena Vista College. She began teaching in one room schools, teaching 8 grades in those schools.

She was hired to teach elementary school in the Kiron Public Schools. While there, Marian met Lloyd Benson, and they were married June 10, 1939 at the Little Brown Church in Nashua, Iowa. To this new union two children, Stuart and Marilee joined them.

She traded in her teaching job to be a homemaker and caregiver to their special needs son, Stuart. Marian continued to be a substitute teacher for the Kiron School. She also did some tutoring for area students. She loved teaching and taught many Bible Studies in every community she lived in.

She did quite a bit of singing for funerals and weddings and in the churches she attended. It was not uncommon to hear her sing strongly at sing-a-longs or to simply sing hymns on Sunday mornings.

Marian lived to the age of 105 and was playing Scrabble the week before she died; loved reading books, especially Amish stories; played word search puzzles and crosswords. She also kept busy with crocheting and plastic canvas creations. Marian lived through six wars, two pandemics, a Great Depression, and a myriad of changes such as automobiles, planes, rockets; radios, television, movies etc. In and through all of life, her faith was strong and an anchor for all challenges. It was an amazing life and well-lived.

She was preceded in death by her parents, her three brothers, Roger, Raymond, and Bruce Currie; her husband, Lloyd; and her son Stuart.

A memorial service will be held at 2:00 pm on Friday, April 22, 2022 at South Grove Lodge Senior Living, 1701 22nd Ave SW, Austin. Visitation will be one hour before the service. A private burial in Kiron Cemetery will be held at a later date.