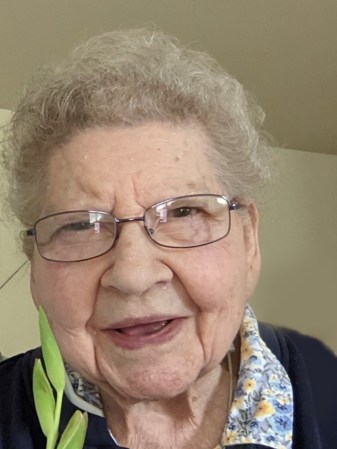 Margaret J. Enfield was born on May 11, 1922 in Osage, IA to Elga and Ellen (Cummings) Enfield. Her early years were spent near St. Ansgar, IA. When she was in her teens, her parents moved to Riceville, IA where she attended high school. She graduated from Riceville High wi9th a degree in teaching. She worked at St. Marys Hospital in Rochester, MN and later taught school in Iowa.

She was married to Heinz Timmerman in 1942. To this union was born a son, Ronald. Heinz died in 1945 during World War II. In 1952 she was united in marriage to Raymond Jacobson in Van Burren, Arkansas. They had one daughter, Judy Jacobson Barksdale.

Margaret was an active member of the LeRoy Evangelical Lutheran Church. She held various jobs and especially liked sewing for Lutheran World Relief. She also took interest in gardening, cooking and cleaning. Margaret also collected antiques. She started a recycling program for LeRoy in the early 1970’s, which was at a time of limited environmental concern in most areas.

A Graveside Service for Margaret will be held on Saturday, April 23, 2022, at 11:00 a.m. at the LeRoy Lutheran Cemetery. A Celebration of Life will be held after the graveside service from 12-2 p.m. at the LeRoy Community Center. The family would like any memorials to be given to their favorite charity, Wildwood Grove, or the Le Roy Ambulance fund.