Making a mark: Quednow is leaving behind a lot of sports memories in Austin 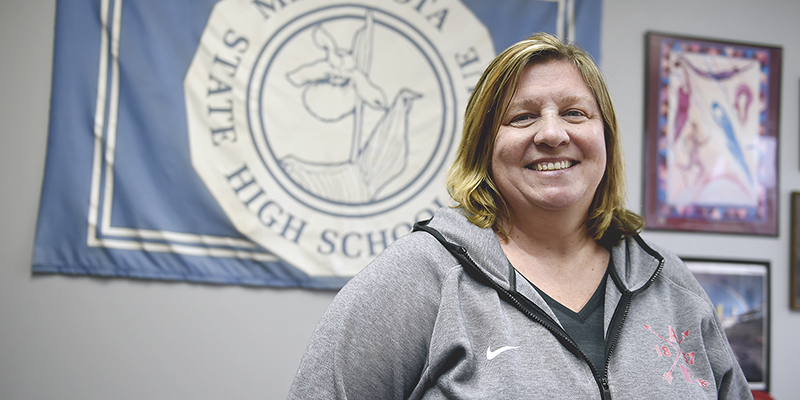 Long-time Austin High School Activities Director Lisa Quednow will be stepping down from her position with the district to take a job as associate director with the Minnesota State High School League. Eric Johnson/photodesk@austindailyherald.com

For as long as she can remember, Lisa Quednow has been around sports.

From playing Little League baseball, to being a three-sport athlete at Pacelli High School, Quednow went on to coach before she took over the position of activities director at Austin High School in 2009. Quednow is now stepping down from that position at the end of April to take on the position of associate director with the Minnesota State High School League.

“I didn’t really want to leave Austin, but these types of jobs don’t come around often,” Quednow said of her new position. “There are a lot of new faces at the MSHSL and we’re going to be plugging people into their strengths. I’m excited.”

Quednow was most proud of how the speech and clay target programs developed under her tenure. Her time also saw Austin emerge as a perennial state contender in boys soccer, boys basketball and girls basketball. The Austin Packer Dance Team has remained dominant and it captured the school’s first state title since 1987 this winter.

“Austin has such a cool history and it was fun to come back and work here,” Quednow said. “I had great coaches and great administrators to work with. I’m very lucky.

Quednow, a 1993 Pacelli grad, played basketball, volleyball and softball. She also spent one year on the golf team for the Shamrocks. She went on to play volleyball, basketball and softball at Riverland Community College, where she eventually coached softball. Quednow also was a grad assistant coach with the St. Cloud State women’s basketball team and an athletic director and head softball coach at Clark Community College in Vancouver, Washington.

Quednow had plenty of role models while attending Pacelli High School and she includes Jim Parlin, Terry Nelsen, her father Gary, who coached baseball at Pacelli for 13 years, Lori Ulferts, who helped Quednow out at St. Cloud, Annie Christopherson and Pete Schmidt.

“I had some phenomenal people in my life,” Quednow said. “I never once thought that females couldn’t be involved in sports.”

Quednow was also involved in band and orchestra while she attended Pacelli.

“A lot of friends at Austin High School,” she said. “I was able to do a lot of things that I wanted to do. Then, as an activities director, I was able to help provide those opportunities to others.”