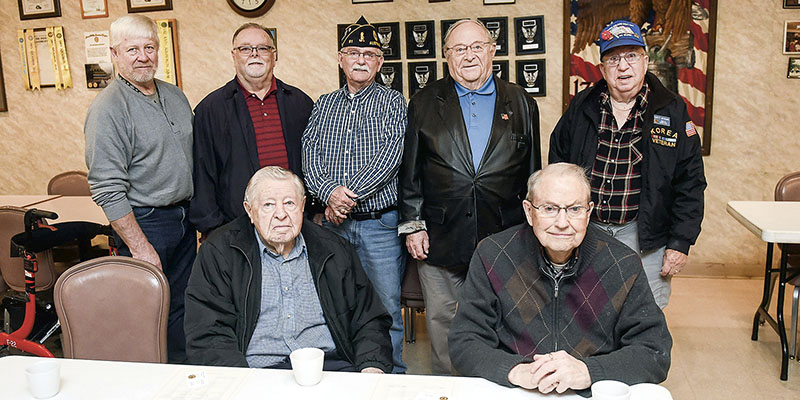 At the Austin American Legion Post 91 on Wednesday afternoon, six veterans were honored for their long-time service to the Legion.

The six in attendance were just some of 13 total veterans who have been with Post 91 for between 50-75 years and who were recognized by Legion Commander Gordy Briggs for setting an example and providing a base for the Legion.

“When you have longevity it gives a solid base and encourages younger veterans that this is important in their lives,” Briggs said before the short presentation. “We’re family orientated. We make sure that all veterans are welcome.”

These were sentiments Briggs shared with those in attendance and as each veteran came to the forefront to receive their national certificate.

“I want to commend you for your loyalty and perseverance and service to our country,” Briggs told the assembly. “Your loyalty is so important to this post.”

Briggs also stressed just how important these honored veterans are in terms of creating a place that will hopefully bring in more younger veterans.

Across the nation, the American Legion has seen a decrease in members as it has struggled to bring into the fold those who have served in more recent conflicts.

“I am hoping today’s small ceremony will touch the hearts of our younger veterans,” Briggs said. “Without them, this post is going to dry up.”

At the same time, Briggs was optimistic as he laid out just how important the American Legion is to communities like Austin. A thriving Legion that can bring in more members is able to raise more money and give back to more organizations.

Post 91 alone donates to the Legions’ baseball and softball teams, LIFE Mower County and has contributed to the upcoming renovations to Honor Guard Park. They’ve also given to statewide interests that are of particular interest to military veterans.

“From the bottom of my heart, thank you,” Briggs said. “Very, very much for being faithful to all of the veterans in the world.”

Veterans who were honored

Those that were honored with serving between 50-75 years.

Plaques will be given for the Top 40 cars and Top 10 bikes.