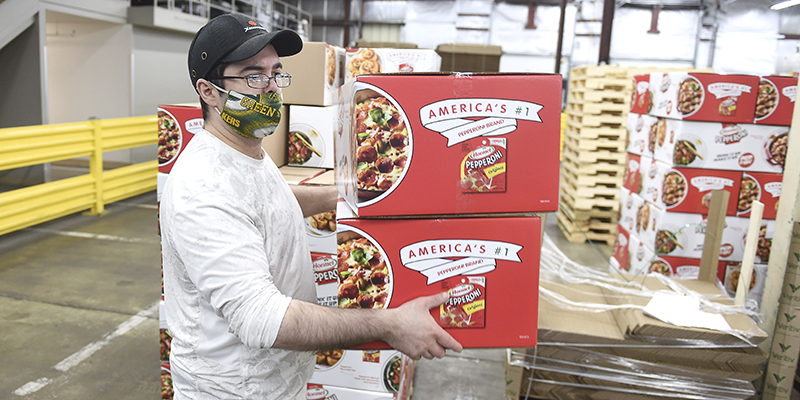 Ryan Carstens packages Hormel pepperoni at Cedar Valley Services Thursday morning. Cedar Valley, like a lot of places, are suffering from a worker shortage and are hoping wage scaling can help reverse that. Eric Johnson/photodesk@austindailyherald.com

There are plenty of voices vying for Minnesota’s $9.3 billion surplus and Cedar Valley Services Executive Director Rich Pavek hopes they will be among those that eventually see the surplus boon.

Pavek and others like him, are trying to bring attention to measures that will help sustain the workforce at CVS, which in turn supports employment opportunities for those with disabilities.

However, it’s not just a minor concern, but a vital one as CVS scrambles to find employees to fill those support roles.

CVS has been able to stand against the storm brought on by COVID-19 pandemic, but as things began opening back up again, finding the necessary staff has been difficult.

A large part of the problem is meeting rising wage demands, which is dictated by a disability waiver rates system that is based on old data.

In short, those working in support services based companies like CVS are falling behind other organizations in terms of wages and salaries.

“We get paid based on certain information they used to determine [wages],” Pavek said. “That’s not what people are getting paid anymore and wages are going through the roof.”

Current staffing shortages are having a trickle down effect to those served by CVS in Austin, Albert Lea and Owatonna, creating a bottleneck.

Pavek said that Cedar Valley has 34 people with disabilities on a waiting list to come back with another 20 new individuals that haven’t been served before.

That’s just a slice of the larger number of people waiting throughout the state, of which Pavek said there are around 3,500 people.

Without the support staff hired by CVS, those with disabilities will unfortunately continue to wait to find employment opportunities.

“In the meantime, they are sitting at home,” Pavek said. “It’s not good. It has a devastating effect sitting at home. They lose the skills they’ve developed, their health is not good, their mental health can suffer during all this time at home and they miss their friends. It’s their general wellness.”

There are three arms of legislation advocates with groups like the Minnesota Organization for Habilitation and Rehabilitation are trying to draw legislator’s attention to, which cover long and short-term workforce sustainability and increasing access to specific and important services named Employment Exploration.

While Pavek recognizes the difficulty to be heard with so many organizations in the same employee shortage situation, it doesn’t take away from the importance of it.

“We’re lobbying to get legislators educated in that,” Pavek said. “A lot of businesses are suffering. We’re not anything different other than people are suffering from being at home.”

“We want to bring these individuals back, especially in a time when there are jobs everywhere and that’s what our job is. To find work for people and get them into an integrated community situation,” he continued.