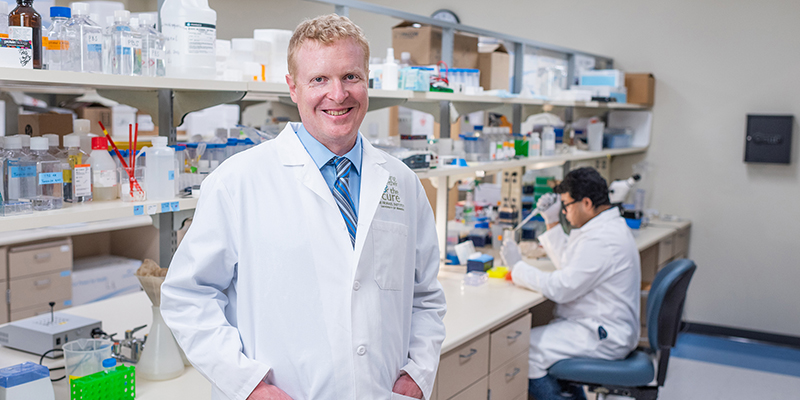 A team of scientists, co-led by Luke Hoeppner, Ph.D., assistant professor and leader of the Cancer Biology research section at The Hormel Institute, and Stephen Ekker, Ph.D., Professor of Biochemistry and Molecular Biology at Mayo Clinic and Dean of the Mayo Clinic Graduate School of Biomedical Sciences, recently published findings from preclinical studies that could lead to treatments that reduce inflammation and pathology associated with sunburn.

The negative effects of sunburn are relatively common and can range from simple redness to hospital visits and are known to eventually induce inflammation. For example, in the United States, sunburn leads to 30,000 emergency room visits every year.

Repeated sunburns can cause skin cancer.

While current treatments relieve the pain and symptoms, those approaches do not reverse the cumulative effects of sunburn, in part because they only target secondary or tertiary effects of UV exposure. Dr. Hoeppner and his team report on an early molecular cause of sunburn.

“We hope that we can target this molecular cause to reduce the negative consequences of sunburn,” Hoeppner said. “We discovered a new step in the process of sunburn that occurs before inflammation, which opens a new post-exposure window to potentially inhibit all of the negative effects of sunburn. We found that targeting a molecule called vascular endothelial growth factor (VEGF) reduces the subsequent inflammation and pathology associated with skin damage caused by sunburn.”

The authors emphasize that future clinical studies would be needed to determine the possible value of VEGF inhibitors as a topical sunburn treatment in humans.

“The approach we used in this study was designed to explore options for potential topical treatments,” Ekker said. “We added VEGF inhibitors after initial UV exposure, to model what happens when people are sunburned and also long after exposure. People often do not realize they are getting sunburned until after they start feeling warm or get flushed. We were able to see VEGF signaling activating in human samples and this strongly suggests there are options to develop interventions and prevent these negative effects.”