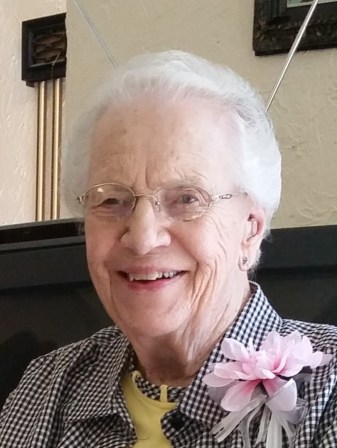 Eleanor was born May 28, 1920 to Reint and Mary (Eckhoff) Karsjens in Bradford, Iowa. Her education was at the Bell Country School in Freeborn County. She worked at the Hemp Mill in Blooming Prairie, Minnesota and as a dietary assistant at St. Olaf Hospital in Austin, Minnesota.

Eleanor was an all-around homemaker who enjoyed cooking, baking, canning, sewing, gardening and growing beautiful flowers. As a family, camping and fishing were enjoyed regularly. In retirement, they traveled across the United States which included Alaska and spent several winters in Arizona. Most of all, she loved and treasured her family and prayed for them regularly. She trusted in God’s promise of salvation and looked forward to going home to her heavenly Father. She was happy to share her faith and love wherever she went.

Funeral services will be held at 11:00 am on Saturday, April 16th at Grace Baptist Church in Austin with Pastor Dan Mielke officiating. Visitation will be at the church one hour prior to the service. Interment will be at Blooming Prairie Cemetery.