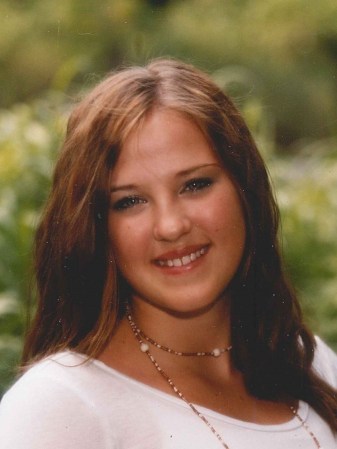 Courtney Jean Traynor Pogones was 32 years old when she was tragically taken from us on Saturday April 2, 2022. She spent the last seven years coping with and eventually losing her life to the issues associated with bipolar disorder. Courtney is a hard person to tell you about with words – you’d really need to meet her to understand the dynamo she was. She had a presence you can’t quite pin, a smile and giggle that could light any room and eyes that sparkled and shined with glee and mischief.

Courtney was born in Austin, Minnesota on June 7, 1989, or as she liked to joke, 6-7-89. Her parents, Roger and Nancy Traynor, raised her here in Austin until they divorced when she was 5. She eventually moved to Jordan, Minnesota with her mom who met and married Ben Robling, who, at her insistence, taught Courtney to drive a tractor.

At age 12, Courtney’s mom was killed by a drunk driver near Jordan, Minnesota and Courtney relocated back to Austin to live with her dad. Recently, Courtney agreed to meet the person who killed her mom and together they did a public service announcement on the dangers of drinking and driving that aired around Minnesota ahead of prom season. Courtney somehow found it in her heart to offer forgiveness to the man who took her mom from her.

Courtney attended Austin High School where she was involved in countless activities and a gifted artist who won the Watercolor of the Year contest. Courtney was known for always being the quirky one with her ideas. Like the time she went to a party and wore a fanny pack filled with people’s senior photos. When her friend Meg asked what she was going to do with those photos, Courtney replied “They’re conversation starters!”. Courtney made you laugh, she made you see the world differently, she made you try new things and she loved you fully.

In 2005, while back in Austin, Courtney met Tyler Pogones and they hit it off immediately and were inseparable from their first date. After their graduations, they moved to Colorado and enjoyed snowboarding, running, skateboarding and the chance to experience building a life together. Courtney was also attending school and working several jobs to help support them. Courtney was often recognized as Employee of the Week, Month, Year – or any accolades an employer offered – and if you talked to anywhere she worked, you would be told she was the best worker they’d ever had.

Health issues separated them in 2010 when Tyler had to return to Rochester, Minnesota for surgery. Courtney returned to the area a couple years later and they started their relationship where they left off. They got engaged and were surprised with the beautiful blessing of Bella Louise in 2014. As often happens, Courtney’s pregnancy triggered her diagnosis of bipolar disorder, and the strains of both of their struggles began to show. Determined to build a life for Bella, Tyler and Courtney married September 5, 2015 and tried as hard as any two people could to make a happy home. After four years, they lived separately because of the pain and chaos their struggles created at home and led them to a joint decision to divorce in order to provide a safe haven for Bella.

In early 2021, Courtney found a new medication to be very effective and Tyler, Courtney and Bella resumed spending time as a family – shopping, going to parks, jumping on the trampoline and just being together. Bella was given the irreplaceable gift of this special time with her mom and those memories will last forever. Tyler was excited to see a glimpse of his true love shining through Courtney’s wondrous eyes again.

Courtney will be missed for many things, among them her bubbly personality and her ability to light up any room, any place. Courtney was the type of person who only knew one way to give love to her friends and that was at full speed. She never loved you a little, she only ever loved you a lot. The type of love where when she saw something that reminded her of you, she would gift it to you – it didn’t have to be your birthday, she would give you little gifts all the time. She had the type of love that when she wasn’t able to get the words out right, she’d show up with an extravagant meaningful craft she had made for you. Like the time she crafted a handmade fishing pole for her friend who had recently lost her dad. Courtney loved you fully and we loved her just the same. She brought so much joy to all of us who were lucky enough to call her our friend.

What we, as her friends and family will remember most about our Courtney, is the amazing mother she was to Bella and how Bella lit up her life. Her life changed the moment Bella arrived. Watching her become a mother was such a special time and we will forever share those memories with Bella. We will remember Court’s contagious laugh, contagious smile & quirky sense of humor. We will remember her when we see butterflies, when we hear her favorite songs on the radio and when we all come together to talk about the good ol’ days. But most of all, we will remember the way Courtney loved us and how blessed we were to have her in our lives.

A Mass of Christian Burial will be held at 11:00 am on Monday, April 11th at St. Augustine Catholic Church in Austin with Father Jim Steffes officiating. Visitation will be at the church one hour prior to the service. Interment will be in Calvary Cemetery. Lunch will be served at the church following the funeral.