County nears end of its portion of clean-up in Taopi 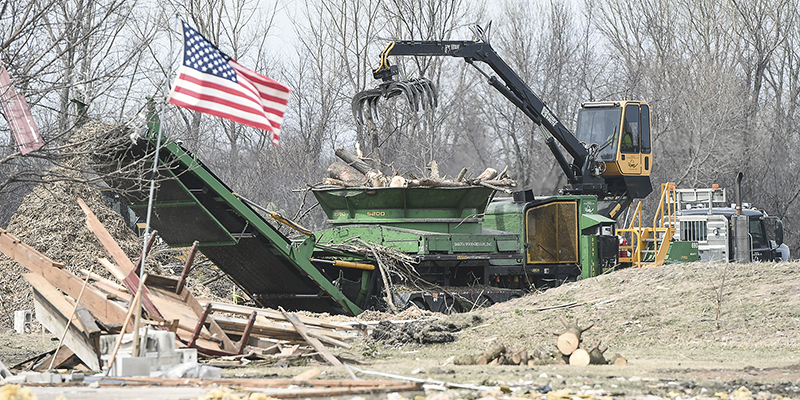 Wood is fed into a large wood-chipper on the west edge of Taopi Tuesday afternoon as clean-up continues from last week’s tornado. Eric Johnson/photodesk@austindailyherald.com

TAOPI — Just a week after the tornado that struck Taopi on April 12, things have taken a major step forward for the community.

Mower County Emergency Management Director Amy Lammey said Tuesday that the county is close to ending its part of the clean-up, which included getting infrastructure back online and clearing the town streets.

“We’re hoping to demobilize today and leave the city to do the cosmetic clean-up,” Lammey said.

With final assessments as to the total cost of damage still a long way off, the fact that the effort has gotten this far in a relatively short time frame is an optimistic development.

That’s largely because assets for the clean-up, including procuring dumpsters and heavy equipment, have aligned so well.

“It might have been an aggressive timeline to do this in a week, but I think we’ve done it,” Lammey said.

On the east edge of town, a large wood-chipper was fed by heavy machinery as crews whittled away at the large piles of trees and branches.

The material spit out by the wood chipper is going to a good cause as the state grapples with the ongoing avian flu that has struck at the heart of Minnesota’s turkey farms.

Lammey said the wood chips are going to be shipped to affected farms to be used in the depopulation of affected birds.

Last week, the National Weather Service determined that the tornado that struck Taopi was an EF2 with winds of over 130 mph recorded.

Ten houses in Taopi were effectively destroyed in the storm and will need to be torn down. Still, the progress made so far is another sign of hope for the community.

“I’m relieved to see the progress we’ve made,” Lammey said. “It helps with the healing process.”