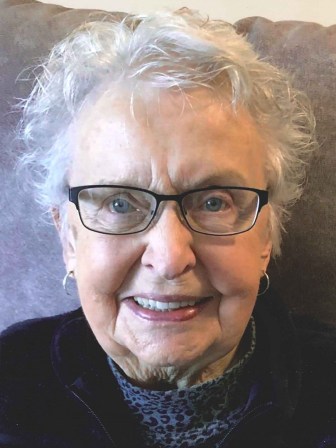 Cleo Ann Grebin, 88, passed peacefully into the presence of Jesus on Saturday, April 9, 2022 at the Cedars of Austin. Cleo was born in 1933, the only daughter to parents Ed and Rita Jirele. Growing up with four brothers, Ed, Al, Neil and Orrie, she learned to love fishing at an early age during regular expeditions to nearby lakes with her family. She worked briefly as a switchboard operator at Hormel and loved dancing, singing, and the big band scene in her twenties. She met and married Tom in 1957 and their three daughters soon followed, with son Jim coming along 5 years later. Cleo would make the raising of their family her life’s vocation. Cleo opened the safe space of their home to all of her kids’ friends and was a mom to all of them.

Cleo was a woman who understood the beauty in life’s simple pleasures: daily reading of the Star-Tribune and Daily Herald, morning coffee or walks with friends, bridge club gatherings, yearly extended family reunions (complete with her home-made potato salad, shrimp and veggie dips, and brownies), regular phone calls or lunches with loved ones, long drives out in the country, and of course her nightly ritual of ice cream enjoyed in her favorite Lazy Boy rocking chair! She treasured her family’s annual “Up North” summer fishing vacations with kids and grandkids. Relationship building was of utmost importance to Cleo. The decades-long friendships that were formed from Tom & Cleo living in the same neighborhood for 50+ years, the biannual getaways up to Island Lake, and winter get-aways to New Braunfels, TX were so special to her.

Cleo made people her priority. She had a heart for others and emulated the servanthood of Jesus to the community she served and to her family; in any job that needed doing, she always did so as a cheerful giver. Cleo served for many years with Meals on Wheels and her church. She was a woman devoted to prayer; her prayer lists and devotionals were always close to her bedside. Cleo understood what it meant to live a life that radiated joy, even after losing her son and 2 grandchildren, and could brighten any room she walked into. Later in life even as dementia set in, she nevertheless was full of joy and her infectious smile brightened her neighbors’ days. Her family will always cherish the many memories and life-shaping experiences that resulted from Cleo being intentional about building relationships. We are better people for having lived lives impacted by the love, joy, kindness, and goodness of Cleo Ann, and we rejoice that she is with Jesus. Thanks, Cleo, for a lifetime of love, dearest wife, mother, sister, grandmother, aunt, and friend.

A Mass of Christian Burial will be celebrated at 11:00 am on Wednesday, April 20th at St. Augustine Catholic Church with Father Jim Steffes officiating. Visitation will be at the church one hour prior to the service. Interment will be in the Minnesota State Veteran’s Cemetery in Preston, Minnesota.