Bruins can’t sustain a two goal lead in game one 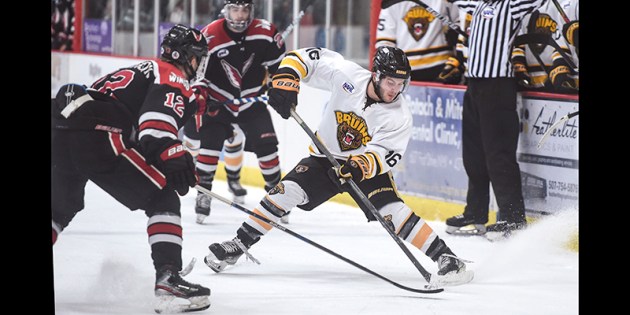 The Bruins’ Therien Thiesing pulls up the puck during a rush against the Aberdeen Wings in the first round of their playoff series Friday night at Riverside Arena. Eric Johnson/photodesk@austindailyherald.com 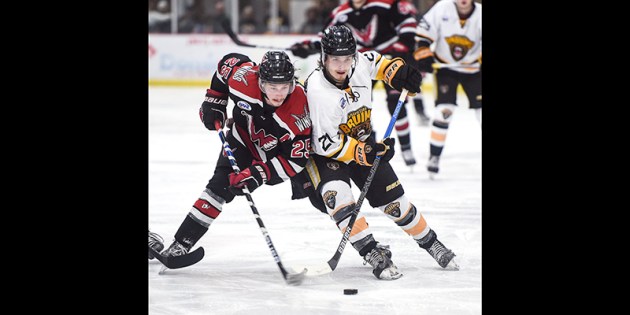 The Austin Bruins Jack Malinski, right, battles with the Aberdeen Wings’ Cade Neilson during the first round of their playoff series last season. Herald file photo 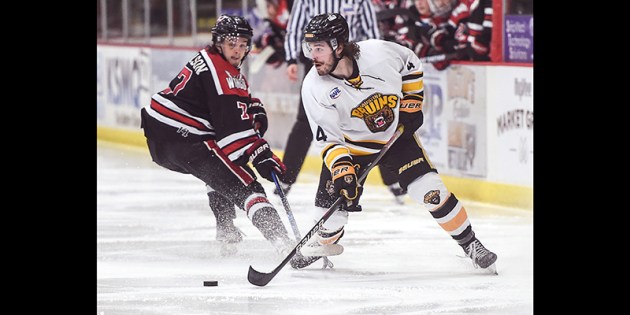 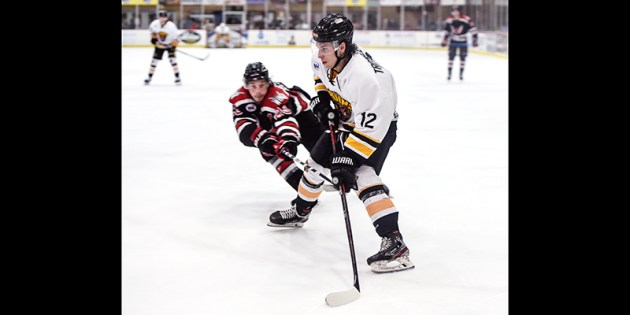 Austin’s Alex Trombley skates in for a second-period score against the Aberdeen Wings Friday night at Riverside Arena. Eric Johnson/photodesk@austindailyherald.com 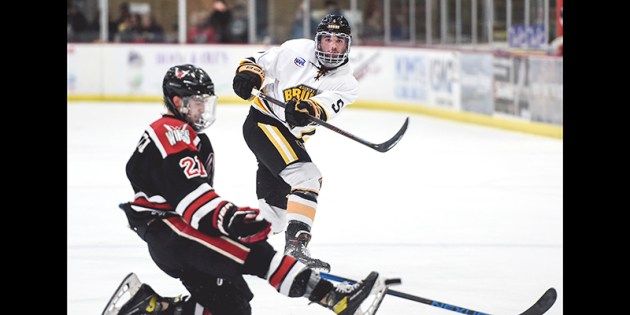 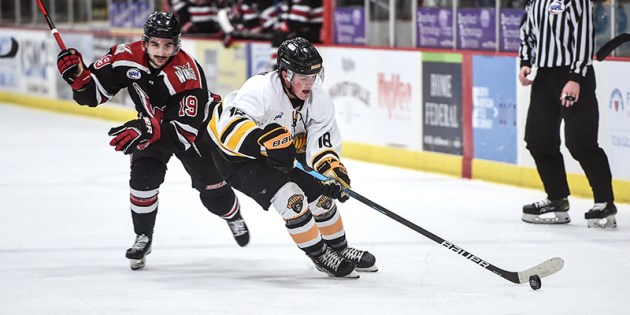 Austin’s Anthony Menghini takes control of the puck during the first-round game of the Bruins’ playoff series with the Abderdeen Wings Friday night at Riverside Arena. Eric Johnson/photodesk@austindailyherald.com

The Austin Bruins learned how quickly things can take sudden turns in the postseason when they allowed four third period goals in a 4-2 loss to the Aberdeen Wings in game one of the NAHL Central Division semifinals in Riverside Arena Friday.

Despite allowing three straight goals, Austin looked like it had a chance to score the equalizer when Sutter Muzatti took a shot to the face while being cross checked on the face-off right after Aberdeen scored the go-ahead goal. The Bruins pulled their goalie to take a six-on-four-advantage, but Aberdeen took the puck and the game as Jacob Bosse drilled an empty netter across the length of the ice.

“It’s a game of momentum. Then you get a veteran who doesn’t want to take a hit and make a play, and he throws the puck away,” Austin head coach Steve Howard said. “Unfortunately they had a couple of those plays where they had some puck luck and they found the back of the net.”

It looked liked things may have been headed for overtime when it was tied 2-2 late in the third, but the Wings were able to create a quick scrum off a face-off in Austin territory and Dominic Schimizzi cashed in when he pushed the puck through to give the Wings a 3-2 lead with 1:19 left in regulation.

“We let their guys go right through,” Howard said. “The middle guy gets to the back of the net and at that point, we’re chasing the game. Hats off to them, they played a great game and we didn’t. One goal games are all coaching and we put the wrong guys out there at the wrong time. We’ve got to be better.”

The Bruins were in control for the first two periods of the game, but Aberdeen seized momentum early in the third when Seamus Cambell scored a pair of goals within a three minute spurt to tie things up at 2-2.

The Wings continued to push the pace over the next few minutes, but Klayton Knapp made some big stops – including a chest-high save on a scorching slap shot with 9:50 left in the game.

Austin had led 2-0 after Alex Trombley deked out Aberdeen goalie Anton Castro and finished late in the second period.

The Bruins struck first late in the first period when Anthony Menghini hammered home a power play goal to make it 1-0 with 27.8 seconds remaining.

Austin must now win three of the next four if it wants to get to the NAHL semifinals. The Bruins host Aberdeen in game two at 7:05 p.m. Saturday and the series will move to Aberdeen next weekend.

“We’ve got to have a short memory and we’ve got to bounce back. They say the two goal lead is the worst lead in hockey and we proved that tonight,” Howard said. “You need guys to step up in the right moments and we didn’t have it tonight in the third.”