BREAKING: No charges for officer in fatal December shooting 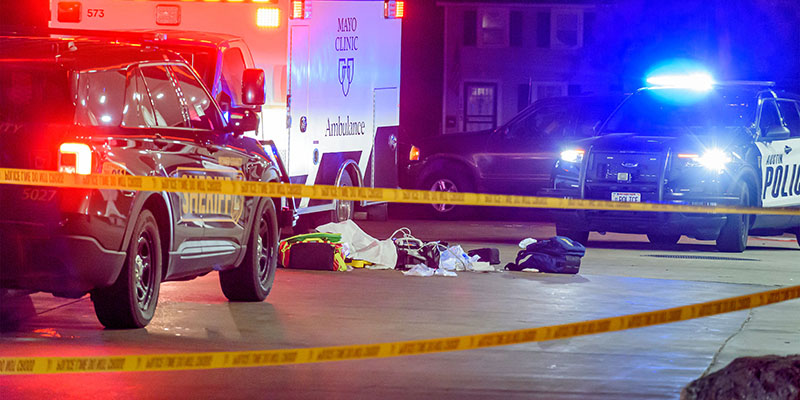 One man is dead following an officer-involved shooting Dec. 23, 2021 at a Kwik Trip in the 1200 block of Oakland Avenue West. Photo provided

Austin Police Officer Zachary Gast will not be facing charges in the fatal December 2021 shooting of Kokou Christopher Fiafonou at the Kwik Trip on Oakland Avenue West.

That was the determination by Olmsted County Attorney Mark A. Ostrem, who had taken over review of the case due to the working relationship between the Austin Police Department and the Mower County Attorney’s Office.

In a three-page letter released Tuesday, Ostrem said, “that the evidence does not support criminal charges against any of the officers involved, including Officer Zachary Gast of the Austin Police Department.”

A SIRT member leans over to look through a window during a standoff prior to the fatal shooting. Eric Johnson/photodesk@austindailyherald.com

The letter said that interviews with law enforcement at the scene as well as civilian witnesses at the Kwik Trip where Fiafonou was shot, along with video collected from the store and squad dash cam video clearly depicts the last few minutes of the encounter.

“… in order for a criminal complaint or indictment to be filed in this case, the evidence must show unreasonable conduct by the police, viewed from the perspective of a reasonable police officer,” Ostrem said. “The evidence must show that the use of deadly force was not necessary to protect the officer or another person from a threat of great bodily harm or death. Because the evidence in this case conclusively establishes that Officer Gast’s use of deadly force was reasonable, our office chooses to decline prosecution in this matter.”

The shooting occurred shortly after 9:30 p.m. on Dec. 23, 2021, when Fiafonou began walking to the Kwik Trip. This came after an approximately 24-hour long standoff at a residence in the 1200 block of Fourth Avenue NW, where Fiafonou resisted arrest and the attempts of negotiators to coax him out of the house. During that same time period, the letter states, Fiafonou demonstrated the same charging behaviors with a knife and sometimes a hammer.

Officers followed Fiafonou to the Kwik Trip and tried to distract him in an attempt to lure him away. However, Fiafonou continued to the store and was heard by officers stating he was going to hurt staff members. He was also observed carrying a long knife.

According to Ostrem’s letter, Gast was out of his car and standing between his squad and the store entrance when Fiafonou aggressively ran at him with the knife.

Gast gave a number of commands to Fiafonou that included “drop the knife” or “stop” or “get on the ground.” Fiafonou continued advancing and Gast, after retreating a little bit, fired his weapon a total of seven times.

Responding officers provided medical attention until an ambulance could arrive, but Fiafonou died at the scene.

“In this case, the facts conclusively establish that Officer Gast acted reasonably when choosing to employ deadly force,” Ostrem said in the letter. “Officer Gast reasonably believed that the use of deadly force was necessary to protect himself and several members of the community from death or great bodily harm.”