Becker could be home to state’s largest solar project 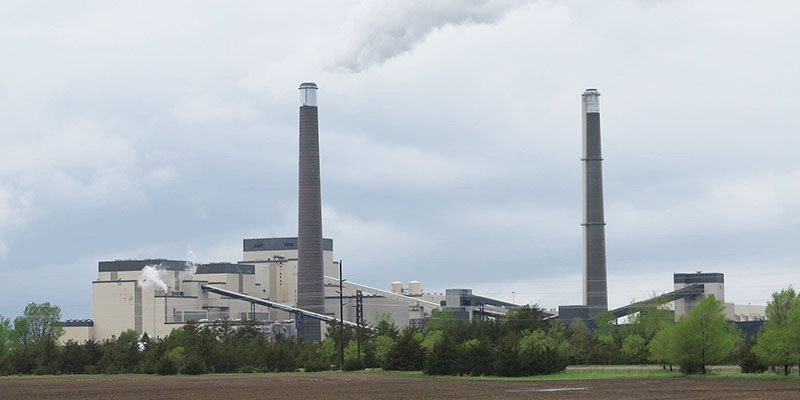 The Sherburne County Generating Station dominates the skyline near Becker, Minn. Xcel Energy is proposing a 460-megawatt solar project to replace some of the electricity produced by the Sherco coal plant, which will shut down by 2030. Kirsti Marohn/MPR News

The flat, windy fields around the central Minnesota city of Becker are mostly used to grow potatoes and corn.

But if Xcel Energy has its way, it will soon reap a different year-round crop — power generated by the sun.

But growing climate concerns and the falling price of renewable energy are prompting utilities to shutter coal plants.

Xcel plans to close all three of Sherco’s coal units by 2030. It wants to replace a portion of that electricity with a 460-megawatt solar project that would cover about 3,200 acres just outside of Becker.

“It’s a big step in transitioning our electric supply,” said Allen Gleckner, clean electricity director for the nonprofit advocacy group Fresh Energy. “Adding a big solar project where a coal plant is retiring is indicative of the transition we’re seeing, and brings lots and lots of benefits.”

Xcel says the Becker project would help toward its goal of producing carbon-free electricity by 2050. If state regulators approve, the Sherco solar project is expected to generate enough electricity to power roughly 100,000 homes every year.

The Sherco proposal is one of many large solar projects expected to be built in Minnesota in the next several years, Gleckner said.

“It’s not just happening in the state, but all throughout the Midwest,” he said.

Xcel and partner company National Grid Renewables are proposing to build the solar project in Becker for a couple of reasons.

First, the cost of solar equipment, like panels and racking systems, has plunged by as much as 90 percent over the past decade, said Gabe Chan, an associate professor at the University of Minnesota’s Humphrey School of Public Affairs.

“That means that solar is now in many situations, the cheapest form of generating a kilowatt-hour of electricity,” he said.

But other costs, particularly land and transmission lines, are going up, Chan said. So putting a solar project near the Becker coal plant, where much of the infrastructure to connect to the electrical grid is already in place, makes sense, he said.

“It creates this opportunity to build a really large solar project – what will be four times larger than the current largest solar project in the state – and take advantage of that infrastructure that’s already there,” Chan said.

However, the growth of renewable energy is meeting some resistance in rural areas across the U.S.

At an April 20 public hearing in Becker, some local residents complained that the solar project will change the landscape and provide a fraction of the jobs that the coal plant supports.

“I’m not fond of this whole solar thing,” he said. “I want affordable, reliable electricity and I’m not confident in windmills and solar panels.”

Becker-area residents are used to the sight of Sherco’s smokestacks rising into the sky. But some, including John Vekved, who also spoke at the hearing, are unsettled by the image of farmland covered with solar arrays.

“How are you going to replace the amount of food that we’re losing to grow in that area over the course of 30 years?” Vekved asked.

Representatives from Xcel and National Grid Renewables said there will be no permanent change to the landscape. After the expected life of about 35 years, the solar arrays could be re-permitted, or decommissioned and removed, and the land could return to agriculture, they said.

Many people at the hearing spoke in favor of the project, including labor union members. They say it will create hundreds of well-paying jobs for trade workers, and help replace work that will be lost when the coal plant shuts down.

“We’d rather see a lot of local communities still have projects going into the future that are providing the tax money, the jobs and the continued work to build and maintain these facilities,” said Nathan Runke, political and regulatory affairs coordinator for the International Union of Operating Engineers Local 49 in Minnesota and the Dakotas.

But once the solar project is built, Xcel estimates just four to six permanent employees will be needed, far fewer than the roughly 230 who work at the coal plant.

Chan said it’s really not valid to compare the two.

“These plants are closing anyway,” he said. “So the comparison between the coal jobs that were there and the renewable jobs that will be there is a bit of an unfair comparison.”

What’s important, Chan said, is what Becker and other communities are doing to attract new businesses and ease the economic impact of the energy transition.

Becker has been working to bring in new businesses, including Google, which has proposed building a data center in the city.

Initially, Becker city officials objected to the solar project’s location, worried it would prevent the city from developing. Xcel agreed to remove about 250 acres from the project area, and the city now backs the project.

Gleckner said there’s a growing awareness of the importance that renewable energy developers connect with communities that will be hosting the projects, to make sure they understand their value and share in the benefits.

“Because this is really just the tip of the iceberg, as far as the amount of renewables and electric infrastructure like transmission lines that are going to come along with it,” he said.

The state Public Utilities Commission is expected to decide this summer whether to approve the permits Xcel needs to build the Sherco solar project, after an administrative law judge weighs in with her opinion. The commission is accepting public comments until May 5.