Back in session: Despite a lull in the COVID-19 pandemic Mower County is still trying to catch-up on case backlog 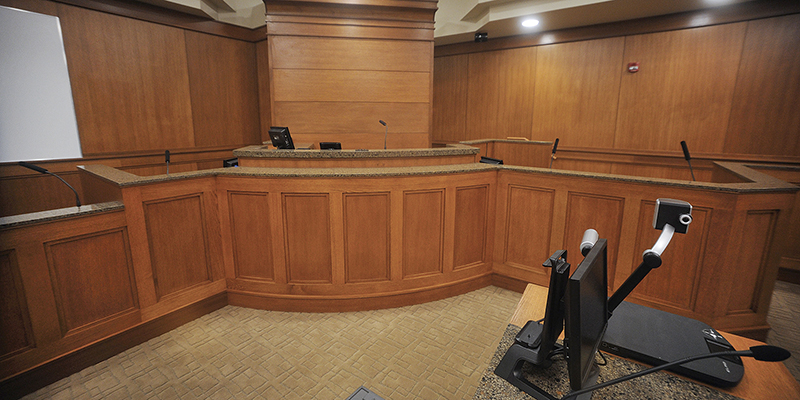 One of courtrooms at the Jail and Justice Center. Herald file photo

Before it settled in, few could know exactly how the COVID-19 pandemic would impact the whole of society.

It’s something Mower County Attorney Kristen Nelsen is keenly aware of as the criminal justice system her office is a part of continues to try and dig out from underneath a backlog of cases.

“I think at the time, none of us could have seen this coming,” Nelsen said from her office Tuesday morning. “If you would have asked me two, three years ago, the courts would all be on the computer, I would have thought you were drinking. The whole system has suffered.”

It was a problem felt early on in the pandemic as courts were among those services that were shutdown when the pandemic fully took hold.

That meant smaller crimes were pushed back and major cases struggled to get juries in seats. Most everything was forced to Zoom creating a lack of accountability in those facing justice.

“There’s less formality,” Nelsen said. “There’s something about appearing in front of the court for your behavior that is a lot different.”

In December, during a report to the Mower County Board of Commissioners, Nelsen indicated they might follow a similar tactic that Olmsted County was taking in order to chip away at the backlog.

This looked at getting those cases that were not big public safety cases back in circulation by offering what deals they could.

“We’re going to give you our best deals,” Nelsen said at the time.

However, Mower chose to stay the course.

“So far, we’re pretty much just business as usual,” she said. “We really haven’t done anything exceptional at this point. Every now and again we have some of our cases in front of a visiting judge or senior judge assigned to our district.”

Nevertheless, Mower County prosecutors and support staff have been required to deal with excess work loads in a changing environment.

It forced a system not usually inclined to bend to adjust to changes brought on quickly by the pandemic. Every time courts would open back up for a time, the pandemic would reverse track and things went back to remotely being held.

It was a juggling act that put a lot of pressure on the support network in Nelsen’s office.

But while her office is working through and chipping away at the case loads, Nelsen has been particularly concerned for what those seeking justice have had to put on hold.

The victims that have had to wait through the starts and stops of the courts.

“I think the biggest thing is we feel so badly for the victims who want their cases resolved,” Nelsen said. “They’ve had to wait six or seven times for a trial. They get ready … and then COVID hits and we’re not doing trials anymore.”

However, as COVID has played a major role in creating a backlog and offices like Nelsen’s eagerly await the end of the pandemic, there are some things she hopes continue.

In particular this is in the area of mental and probate cases that involve civil commitment. In the past, should someone visit the Mayo Clinic Health System-Austin for mental health, they could be committed as far away as North Dakota.

This tied up resources of the Mower County Sheriff’s Office, who were in charge of shuttling the patient back and forth. At the same time it could be detrimental for the patient as well.

“It’s not a good use of the sheriff’s time and it’s horrible for the patient,” Nelsen said. “[Using Zoom] has a remarkable benefit for those patients and it doesn’t affect the justice they get. I hope once COVID is over that the system will continue to use Zoom.”

Through the ups and downs of the entire pandemic, Nelsen said she’s been proud of the way her office in all of its facets has worked together. At the same time, she recognizes that it’s been a team effort across the entire system that has allowed Mower County to stand a bit better than some places.

“I think it’s been a real team effort,” Nelsen said. “We’ve all had to give each other grace in the system.”

“Probation has done the yeoman’s work to keep people going while people were waiting,” she continued. “Steve King and correctional services pretrial … We couldn’t have done it without being a team.”