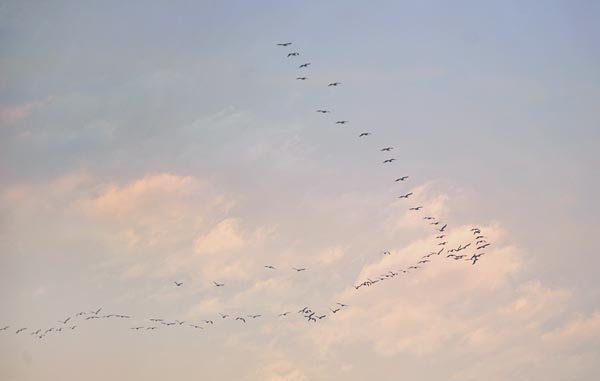 A flock of Canada geese head north against the fading light of the day. Herald file photo

Various strains of avian influenza are common in wild ducks and geese. The group of viruses causing the current outbreak was first identified in 1996 in China and has been changing and interacting with other related viruses ever since.

“And typically, it hasn’t been that lethal for the wild birds that naturally carry it. But this strain has been different, and we’ve seen much greater mortality in wild birds,” she said.

The agency is getting many reports of dead waterfowl and raptors. There’s been limited testing of those birds, mostly in counties where the virus hasn’t been confirmed in wild birds or poultry flocks.

Tracking an outbreak in wild birds is difficult, Carstensen said, because they don’t know what’s missing, the data only includes the dead birds someone sees.

“So all of this is a gross underestimate of what’s likely happening out there in real time”, she said. “So we’re just kind of getting a snapshot of what’s happening with this virus.”

But collecting those snapshots helps researchers see that things look different from the most recent large avian influenza outbreak in 2015.

At the University of Minnesota Raptor Center 37 eagles, owls and hawks tested positive for the virus from March 28th to April 19th this year.

“In 2015, we were testing every raptor as they came in, we didn’t have a single positive,” said executive director Victoria Hall. “(That) is very different from our nearly daily positive bird trend we’re seeing right now.”

Raptors likely are infected with the virus when they eat sick or dead waterfowl.

Similar snapshots are coming in from across the country to the U.S. Geological Survey National Wildlife Health Center.

Nearly 50 million turkeys and chickens died in the 2015 avian influenza outbreak, but fewer than 100 wild birds tested positive for the virus nationwide according to USGS emerging disease coordinator Bryan Richards. For the current outbreak, positive tests in wild birds are at 700 and growing. And a wider range of wild species are getting sick.

“If you looked at the 2014-2015 outbreak, I think there were probably less than 10 events recorded in all of North America, where there were actually one or more wild birds found dead on the ground. We’re at someplace in 120-130 range right now, of these individual locations where one or more sick or dead wild birds has been recovered,” said Richards.

“So by all of the metrics, this virus is behaving quite differently than what we saw in 2014-2015. And it’s been behaving differently for the past three years, if you look at what’s going on in Europe and Asia,” he said. “So why is it behaving differently, I think is the key question. And what are the long-term consequences of that?”

One consequence might be more risk for poultry farms. Migrating waterfowl carry the virus to the area, but Richards said how the virus then infects individual commercial flocks is still poorly understood.

Data from Europe indicate this virus might be more persistent and less likely to fade away after the spring migration, he said.

“Typically we would think that as birds are dispersing on their nesting grounds it reduces the chances for transmission, and the viruses just kind of die out,” he said. “But the last two seasons in Europe that didn’t happen. It came back in the fall. So now that’s another tremendous open question. What will fall look like this time in North America?”

DNA testing of the current highly pathogenic virus found in wild birds shows it is mutating, and combining with other viruses the birds carry.

“It’ll be really interesting to see how that changes over time,” said Richards. “What will happen? Whether they become more pathogenic or less pathogenic is just anybody’s guess. Our crystal ball simply doesn’t work that well.”

Staying ahead of the virus will require extensive testing of wild waterfowl later this year as they prepare for the fall migration, said Richards. But testing wildlife populations is challenging as they spread across the landscape.

Recent deaths of eagles and owls in Minnesota have drawn a lot of attention, and Raptor Center executive director Victoria Hall wants the public to stay engaged, reporting sick or dead birds.

“It’s crucial to try to learn more, we’re learning more about how this disease is moving through different populations,” she said. “And that’s going to help everyone. It’s going to help us with wildlife, it’s going to help us at the raptor center. But it’s also going to tell us more how the disease moves, which can help our colleagues in agriculture with poultry farms.”

Hall said the University of Minnesota is also conducting research to understand if raptors have survived previous influenza viruses.

There’s uncertainty about how widespread the mortality in wild birds will get. Richards has seen wild bird deaths increase as the virus moved north. But he doesn’t expect significant population declines in waterfowl or raptors.

“If you see a nest with a dead eagle underneath the tree, that’s a pretty substantial impact to your personal interactions with eagles,” Richards said. “But if we back up to the population level, it’s probably not going to impact that greatly.”

In Minnesota, the cold, wet spring might extend the outbreak.

When most lakes and wetlands are ice and snow covered, migrating waterfowl congregate in large numbers where there is open water, increasing the risk of transmitting the virus, said Carstensen.

“And also the cold weather keeps the virus viable longer,” she said. “So if we want to get rid of this virus sooner, we want temperatures that warm up, and things to dry out. And that will help the virus dissipate, because it thrives in these cold, wet conditions that we’re seeing right now.”

And that gives the virus more opportunities to continue evolving in unpredictable ways.