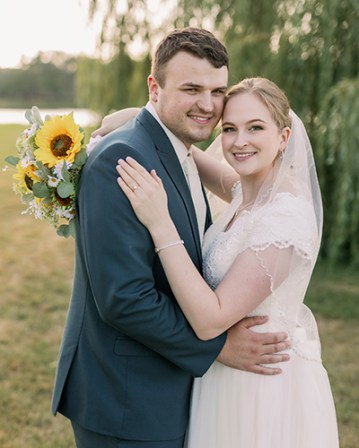 Goskeson is the daughter of Steve and Cynthia Goskeson, of Albert Lea. She graduated from E&E Academy Homeschool in 2011 and Ridgewater College with an Activities Director degree in 2015. She is currently an activities professional.

Grandparents are the late Ronald and Esther Lokken from Baton Rouge, Louisanna, and Deloris and the late George Goskeson of Albert Lea.

Wacholz is the son of Lane and Sarah Wacholz of New Richland and graduated from New Richland-Hartland-Ellandale-Geneva High School in 2011. He graduated from South Dakota State University in 2016 as a Doctor of Pharmacy. He is currently employed as a pharmacist.

Grandparents are the late Leonard and Arlene Wacholz of New Richland and the late Arlynn and Ruth McHenry of Northwood, Iowa.

Hosts were Tim, Kim and Lexi Gerber and Don and Kim Nystel, (friends of the bride).