Unbeaten Vikings are ready for a big challenge 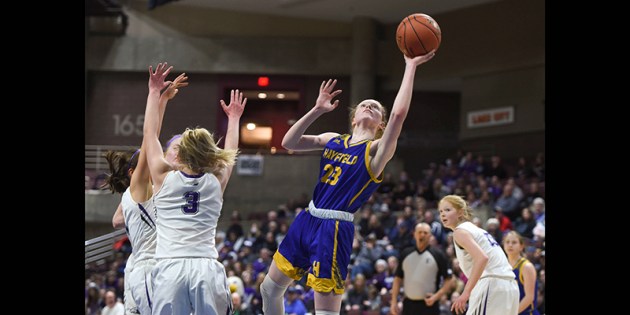 Hayfield's Aine Stasko leans for the shot against Grand Meadow in the Section 1A title game Thursday night at Mayo Civic Center in Rochester. Eric Johnson/photodesk@austindailyherald.com 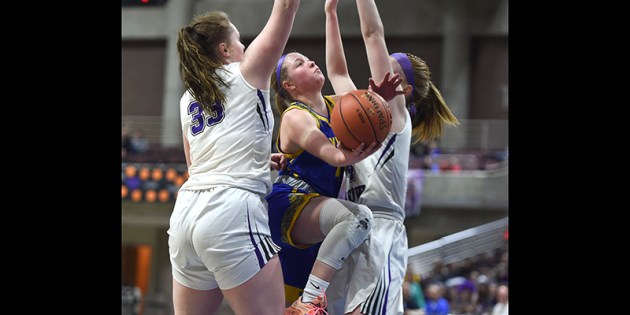 Hayfield's Chelsea Christopherson splits the defense of Lexy Foster (33) and River Landers, right, during the first half in the Section 1A title game Thursday night at Mayo Civic Center in Rochester. Eric Johnson/photodesk@austindailyherald.com 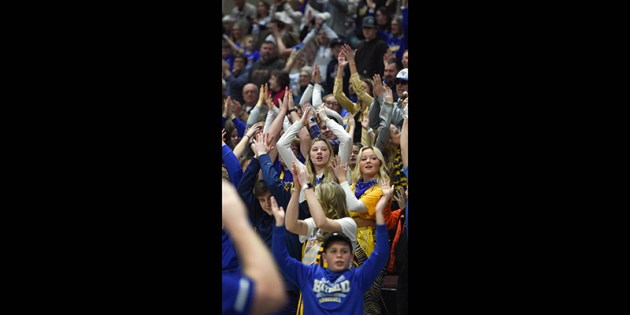 The Hayfield crowd performs the skol chant during the final minutes of the Section 1A title game against Grand Meadow Thursday night at Mayo Civic Center in Rochester. Eric Johnson/photodesk@austindailyherald.com 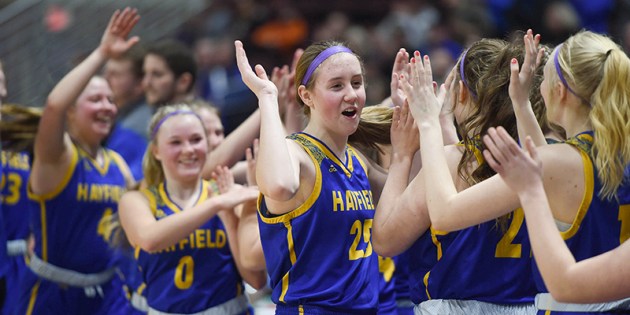 Hayfield's Natalie Beaver celebrates with teammates as she comes off the floor during the Section 1A title game against Grand Meadow Thursday night at Mayo Civic Center in Rochester. Eric Johnson/photodesk@austindailyherald.com 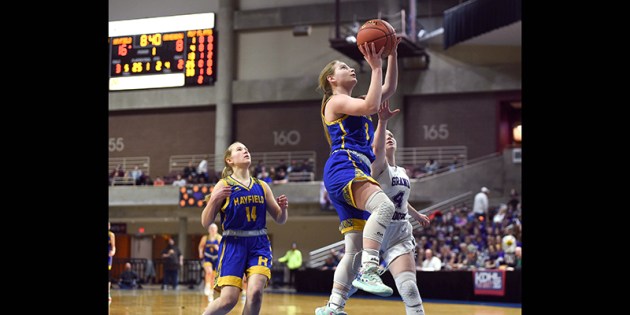 Hayfield's Kristen Watson gets a lay-up during the first half against Grand Meadow in the Section 1A title game Thursday night at Mayo Civic Center in Rochester. Eric Johnson/photodesk@austindailyherald.com

HAYFIELD – It’s been more than a year since the Hayfield girls basketball team has tasted defeat, but the competition is about to get a lot tougher.

The Vikings will put it all on the line as they enter the Minnesota Class A State Girls Basketball Tournament quarterfinals as the No. 5 seed and they will play No. 4 seeded Cass Lake-Bena in Maturi Pavilion at 1 p.m. Thursday.

Hayfield doesn’t have any state tournament experience on its squad, but the team saw the Viking boys win a state title last year and plenty of the players have been to the state tournament as fans.

“We have to play our game and we can’t let up. We’re more excited than anything,” Hayfield senior Aine Stasko said. “I don’t think anyone is nervous.”

Hayfield’s defense has carried it throughout the season, but CLB will try to spread things out and attack the Vikings from the perimeter. Hayfield head coach Kasey Krekling said that CLB has five players who can all shoot from deep.

“They remind us a lot of New Richland, who we played twice this year,” Krekling said. “They will spread us out and try to shoot a lot of threes. Defensively, they run a 1-2-2 and we’ll have to prepare for that. We’re not going to change what we do, but we may make a few adjustments.”

Krekling, who graduated from Hayfield in 2007, guided the Viking baseball team to a state title last spring and now he’s led the Viking girls to their first state tournament appearance since 2008. Between baseball and girls basketball, Krekling has won 57 straight games as a head coach.

“It’ll be a new experience for me. I’m looking forward to it and I’m excited. We’ve been in that section title game a few times and you have to appreciate it when you finally get through,” Krekling said. “We have to stay aggressive. We can’t get shell shocked by the big lights. If we’re the more aggressive team, I think we have a very good chance of moving on.”

Hayfield sophomore point guard Kristen Watson has been the tip of the spear of Hayfield’s pressure defense. She’s thrived on creating turmoil in the backcourt and scoring in transition.

Watson is hoping she can do more of that on the big stage.

“We’re taking every practice seriously and we’re pushing each other to work toward our goals. It’s still the same court and the baskets are still 10 feet tall,” Watson said. “We have to play our game and we have to work hard on defense.”