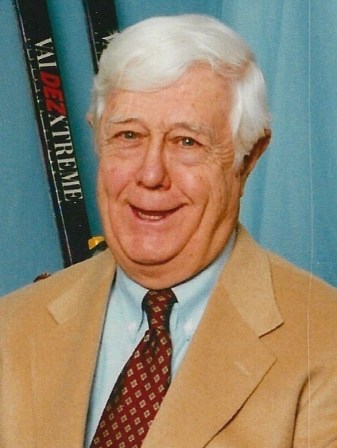 Thomas Edward Knauer died at Good Samaritan Medical Center on January 12th, 2022, at the age of 88 due to respiratory complications from Covid-19.

He was born in Austin, Minnesota on May 4th, 1933, to Rudolf and Esther Knauer (Dwyer), and was the 3rd son of 5 boys. Tom grew up in Austin and eventually joined the United States Air Force after graduating from St. Augustine High School (Pacelli High School currently). After he left the Air Force he went to the University of Minnesota and graduated with a degree in Education, and became a teacher and eventually a principal in Illinois where he met his wife, Mary Anne Zack, a music teacher at the school where he was principal. He eventually got his PhD in Education from the University of Colorado.

Tom and Mary Anne were married in 1961 and had 4 children, 3 sons and a daughter, and Tom eventually became the Assistant Superintendent in Highland Park, IL. The family moved to Woodbury, MN in 1972 and then to Brookings, SD in 1975, where Tom became the Superintendent of Schools. Finally, the family moved to Boulder, CO, in 1977. Tom continued his career in education and eventually worked for the State of Colorado and Governor Lamm, of which he was very proud.

Tom’s greatest joy in life was his family, whether that was being with his brothers, spending time with his kids and grandkids, or tracking his family lineage. He was known for his sense of humor, loved playing tennis, watching his beloved Minnesota Vikings and Golden Gophers play sports, singing in the choir or karaoke, and deepening his faith in Jesus Christ with his love of the Catholic Church.

Tom is survived by his children: Thomas Gregory Knauer (Felicia), David Eric Knauer (Kelly), Kevin Michael Knauer (Shayna), and Carolyn Anne Gallagher (Kevin), his eleven grandchildren, brothers Jack and Bill Knauer, and numerous nephews and nieces. He was preceded in death by his parents and brothers Don and Gene Knauer.

Funeral services will take place in the spring.