‘This is amazing’: Family of Chol Opiew gets to see the final results of Pay It Forward 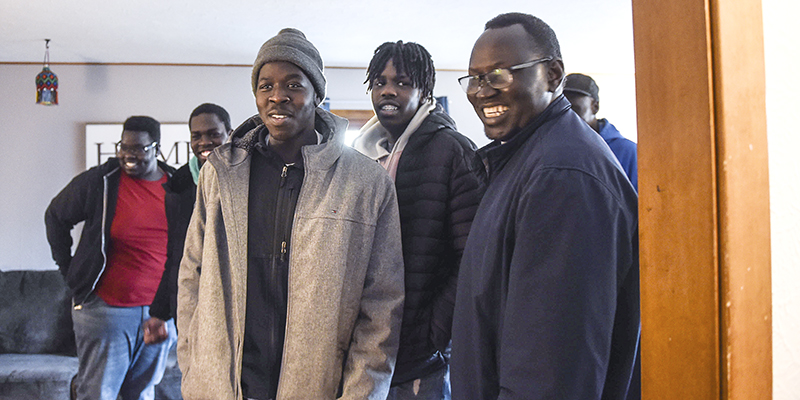 The family of Chol Opiew smile as they see the renovation of their home by Pay it Forward for the first time last year. The application period for this year's project is now open. Herald file photo

In what was its biggest project to date, the family of Chol Opiew finally got to see the final results of this year’s Pay it Forward renovation project.

As Chol’s family walked through the house, which looked vastly different from the home they left earlier in the week, very little words were shared.

The smiles were enough to know what kind of transformation had taken place.

The remodeled kitchen was one of the first things greeting the family of Chol Opiew during Pay It Forward’s grand reveal Friday evening.
Eric Johnson/photodesk@austindailyherald.com

“This is amazing,” said Opiew Chol Okey as he stood in an upstairs bathroom with Pay It Forward’s Gina Grundmeier. “I haven’t seen anything like this.”

Opiew, along with his siblings and uncle and the community, were shocked late last year when Chol Opiew was murdered while visiting family in Ethiopia.

He not only left a devastated family behind, but a house in need of work. The main floor shower was largely unusable and the upstairs bathroom could hardly contain a tall family.

All of it was taken care of with this past week’s renovation, which not only accounted for those areas, but also brought in new appliances, furniture, beds and gutters outside of the house.

Later this spring, there will also be landscaping done.

“There was just a lot of construction every step of the way,” Grundmeier said. “Just the enormity of doing two and a half beds alone.”

But the end result was worth it as the family reflected joy and amazement around every corner.

Most every room in the house saw some kind of transformation by Pay It Forward. Eric Johnson/photodesk@austindailyherald.com

“My hope for these kids is … it helps in the healing process,” Grundmeier said. “I hope it alleviates some of the things kids shouldn’t have to deal with.”

Alicianne and Tom Fritz are next door neighbors of the family and close friends. It was the Fritz’s that wrote the initial essay nominating the family for the project.

As they got an early look at the house, they were just as amazed as everybody else at the change from within.

“It’s inspirational,” Alicianne said. “It brings such a different energy to the house. It demonstrates sorrow to joy. I hope they can feel their father’s love through this community.”

“I hope it helps them continue on with what their dad expects from them,” Tom said. “I hope they are motivated to pay it forward with their education and their acts.”

As Opiew continued through the house, he said that he could feel the kindness of a community coming forward and was grateful to be on the receiving end of that caring.

“I’m surprised how much was done in a short amount of time,” he said. “I’m just stunned and thankful for everything.”

“I think (Chol) would have had the same reaction,” he said, reflecting on what his dad would have thought. “Stunned that a community of people would come together for all of this.”

With his passing, Opiew left six children and his father’s cousin.

This was Pay It Forward’s ninth project.