The Bear Necessities: AJ Sullivan has been introducing her beloved characters to children 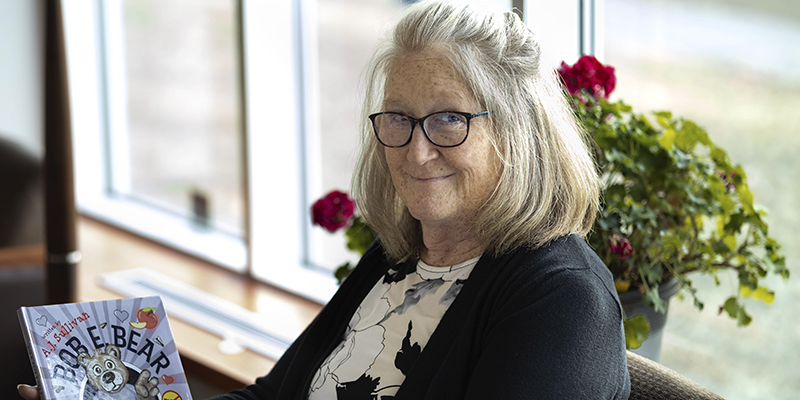 Decades ago, Austin resident AJ Sullivan was a young girl seeking stillness in a house that never stopped moving.

The second-youngest of six and originally from Buffalo, New York, Sullivan never wanted trouble. She stayed out of the crossfire of her quarreling sisters. Her father was a scientist, and her family trailed across the country in the 60s and 70s from naval air station to naval air station for his career. As a result, Sullivan was chronically the new kid in town, something of a nightmare for a freckled, glasses-clad, brightly-red-haired girl when classmates were not always kind.

Sullivan needed a world, a space, to call her own. An escape, she described it. She found it between the covers of a book. Now, many years later, she is creating fictional worlds for today’s young readers.

“They always knew where to find me,” Sullivan, the only one still living of her siblings and parents, recalled. When the dust would settle after a multi-sibling squabble, little AJ had indubitably stashed herself away in the corner of her bedroom, building a fortress of books around her to ward off the chaos. 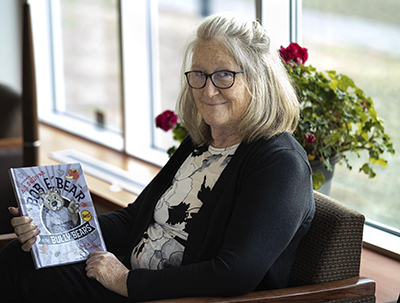 As a teen, the words Sullivan had absorbed for so many years began to overflow and she began to write. “Do you realize you’re a writer?” a high school English teacher asked Sullivan after she turned in a short story assignment. A pen has been clasped in her hand ever since.

Before Sullivan became a mother in 1983, a cap had been put on her creative well. She wrote technical and medical research papers for Philips Lighting which, while interesting in its own regard — Sullivan researched how artificial light and health interact in hospitals — was not the sort of passion she’d sparked in herself when she was a teenager years ago. She wrote here and there for regional magazines throughout her travels, having lived in 12 states and Spain between her service as a Russian linguist and analyst in the Navy and relocations for her work.

The inspiration to write came at a trickle. When Sullivan’ oldest was born, she wanted to write bedtime stories that would help her son adapt to the world around him. And that trickle broke into a geyser.

“He doesn’t remember that I used to read him the stories handwritten off of paper,” Sullivan laughed in fondness of her son, now 39. As her two sons were born and grew up in the ‘80s, Sullivan created and wrote about the universe of Bob E. Bear, an anxious little bear cub who must navigate all of childhood’s greatest hurdles: bullying, becoming an older sibling, and growing up.

It took Sullivan four decades to get the words she wrote for her children published. She is as prone to writer’s block as any other author, and between motherhood, a career, medical challenges and barriers to publishing, the writer’s momentum has ebbed and flowed until now when, nearly 40 years later, she took the leap and gave a piece of herself to the world with the help of Fox Pointe Publishing, an indie publisher in Austin.

In some ways Sullivan, whose books are published under the pen name AJ Sullivan, is writing children’s books to do right by the red-haired, freckled little girl — picked on by those who didn’t like the way she looked—who still lives inside her.

“There weren’t a lot of series like Bob E. Bear when I was little,” Sullivan said. “You couldn’t get to know a character. You don’t really want to give up a character, you want to follow them.”

And while Sullivan knows she can’t and won’t write Bob E. Bear into adulthood, she hopes her young readers will do exactly that: follow the timid little bear as he takes on elementary school and learns courage from everything that comes his way.

That is why Sullivan is happy to share something so intimate and personal that she wrote for her own sons and now shares with her four grandsons (15, 12, 10 and 8); “some of the things that I’ve written about are very important for children to learn,” she explained. She knows that a fierce love for literature, and a hunger for knowledge, is the fertilizer for little minds to grow and expand. 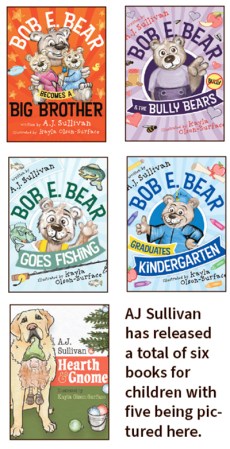 “I think literature opens up your mind to new concepts and new ideas,” Sullivan said. “You don’t necessarily have to believe every single little thing that your parents believe. You need to explore for yourself and decide what you think and decide what you enjoy.”

The series is a brightly-illustrated sequence of guidance to life lessons for early elementary readers. The first installment of Bob E. Bear shows the importance of intergenerational family relationships as Bob E. goes fishing with his grandfather. In another, the bear’s parents bring home twin bear cubs. In the latest book, which will be released in mid- to late-April, the cub is faced with a bully at school.

Writing children’s books is not a matter of making up silly names and cute rhymes. It’s difficult and a lot of pressure. What children consume now will determine what they produce as adults, and children’s authors also feel the heat to be up to the standards of parents.

“Generations change in the way children interact with each other and with adults,” the author added. “It has changed tremendously over the years. You have to be very mindful of cultural differences. There’s a theme through the books of teaching life lessons to children, and you have to make sure that life lessons are what you’re teaching, and not a specific moral code because not everyone shares the same moral code.

“So the books need to be generic enough but also specific enough. Specific to little children but generic enough that it could be any little child because, pretty much anywhere in the world, kids go to school, become older siblings, get picked on.”

By day, Sullivan is the college and career counselor for Austin High School. By night, she can be found on the computer, coffee in hand and Shih Tzu in her lap, toiling away on her works-in-progress. She also recently penned “Hearth & Gnome,” a book geared for toddlers about a yellow lab and a gnome that get into shenanigans throughout the house. In the next five years she hopes to have released at least one of her three mystery novels, which are geared for adult readers. Her books are available at Sweet Reads Books and Candy, published by Kiersten Hall of Fox Pointe Publishing and illustrated by Kayla Olson-Surface of New Germany, Minnesota.

There’s a writer in all of us, Sullivan says. Every time someone offers her a story idea, she in turn encourages them to tell it.

“Everyone has a story. Everyone is unique, they have their own unique set of circumstances. Their backgrounds are unique. There’s a story in every one of us and we should all share our story.”