Sigh of relief: Vikings avoid being upset against Randolph 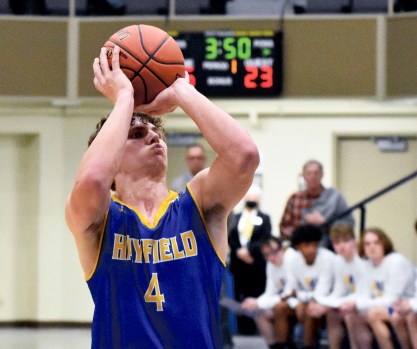 Hayfield’s Easton Fritcher puts up a shot in the first half against Randolph. Rocky Hulne/sports@austindailyherald.com 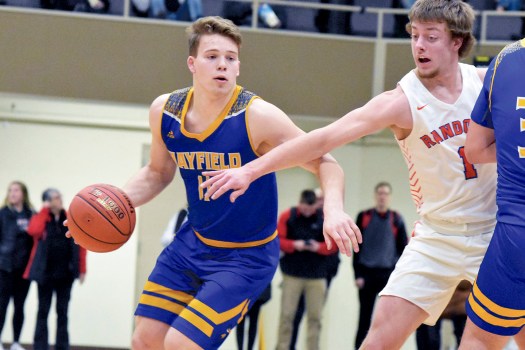 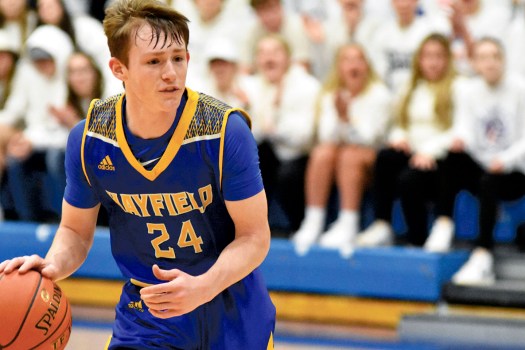 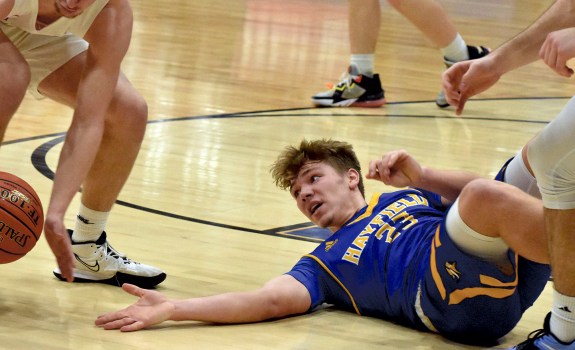 ROCHESTER — The No. 1 seeded Hayfield boys basketball team was a play or two away from having its season slip away, but the Vikings ultimately prevailed in a 66-62 win over No. 8 seeded Randolph in a Section 1A quarterfinal in Mayo Civic Auditorium Monday.

The Rockets (14-14 overall) had the ball down by three with less than 10 seconds left and Hayfield chose to intentionally foul. The Rockets missed the front end of a one-and-one and Ethan Pack hit one of two free throws to clinch the game for Hayfield, which had missed three straight free throws.

The Vikings (27-2 overall) never trailed or gave up their lead in the second half, but they weren’t as effective as they were in the first half, when they led by 13.

Hayfield junior Isaac Matti finished with 14 points, five rebounds and five assists, but he and Pack were slowed down by Randolph’s triangle and two defense, which focused on slowing down Hayfield’s top playmakers.

“We practiced it all week, but it threw us off and Ethan and I might’ve forced a couple of shots. But Kobe and Easton stepped up for us big time tonight,” Matti said. “Survive and advance. It doesn’t really feel like an awesome win for us. We know we can play better than this and it was a kind of a lesson or wake up call for us.”

Fritcher scored 15 points for Hayfield and Foster struggled with his shot early on before finding his rhythm halfway through the first half. Foster finished with 24 points as he connected on eight three-pointers, including a big one that put Hayfield up 62-57 with 4:05 left in the game.

“It’s a different atmosphere here (at Civic Center). It’s a little deeper,” Foster said. “I just had to adapt and find my touch. We knew going in that any team late in the season is going to give us their best shot.”

Hayfield had won 23 straight games before dropping the Gopher Conference title game to Maple River 56-51 on Feb. 26, but the Vikings have looked sharp in the postseason as they dismantled Wabasha-Kellogg 84-46 in the opening round before beating the Rockets.

Hayfield, which won its first ever Class A state title last season, will now play No. 4 Spring Grove in the Section 1A semifinals at 4 p.m. Saturday in Mayo Civic Center.