Service for a community 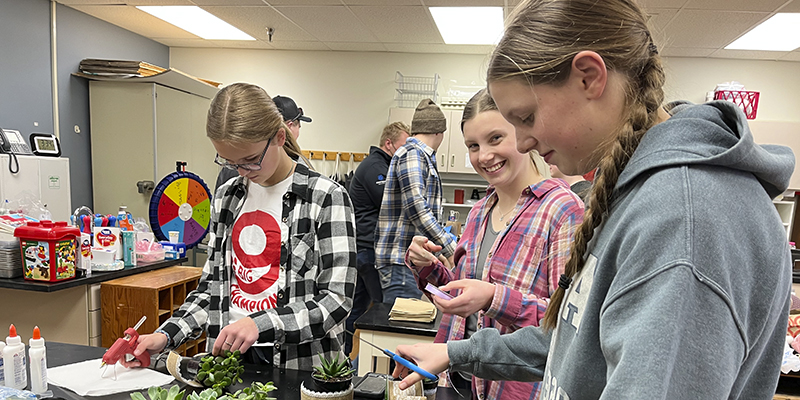 Austin High School FFA members work on their plants last Friday before taking them out and gifting them to residents at South Grove Lodge Senior Living as part of a service project. Photos provided

Challenge from Region 8 FFA turns into service project for AHS

A challenge and service project by Austin High School’s FFA club was just as meaningful to its members as it was to the recipients of the project.

Last week, the group took up a Region 8 challenge, which covers southeast Minnesota. The point of the challenge was to do something in the community that let others know you care.

“Region 8 put it out to all of the schools in our region that we do something nice as a challenge,” said group co-advisor Kim Schechinger. “So we took 22 plants for [South Grove Lodge Senior Living] just to brighten their day.” 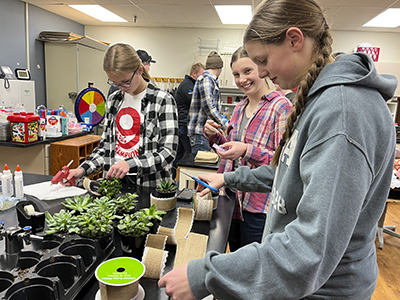 Austin High School FFA members work on their plants last Friday before taking them out and gifting them to residents at South Grove Lodge Senior Living as part of a service project. Photos provided

“The students have done some nice and thoughtful plants to provide to those would could use them,” said the group’s other co-advisor Nick Schiltz. “It’s a great gesture and in many ways, reminds us that we all have the ability to think of those who might need a thoughtful gift. I’m very proud of these students.”

Twenty-two flowers were purchased for the residents of what was formerly Primrose Retirement Community.

“We purchased succulents and were able to decorate all of the pots using all sorts of different materials,” said club Vice President Abby VanPelt.

“We spent one afternoon and hopefully made someone’s day,” added President Andrew Sayles.

It was also a chance to do something impactful during National FFA Week, which was celebrated last week.

The group was initially hoping to deliver the plants on Feb. 22, but because of the storm, they ultimately delivered the plants the following Friday.

“It’s a fun activity to do during FFA Week and make a difference in our community,” said Treasurer Ryan VanPelt. 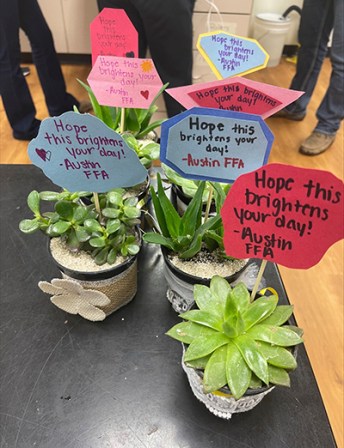 Positive messages were sent along with each plant. Photo provided

“It’s being able to make those separate connections outside of FFA,” Abby said. “It just shows the service part of FFA. We do service throughout our communities. It’s a huge part of FFA.”

However, it’s also an opportunity for the members to continue their development within the ranks of FFA. Whether doing service projects as a group or a Supervised Agricultural Experience as an individual, students are developing core values and skills they will carry with them past FFA.

“I think it’s a great youth development program,” Sayles said. “It’s a lot easier to talk with people. The opportunities it gives you … getting opportunities to grow through the agriculture field.”

That’s where agriculture has a branching effect, because the skills students gain through FFA can be carried outside of the fences of agriculture.

“I really want to stress the growing part of it,” Schechinger said. “It’s not just focused around agriculture. There are development leadership skills, team working skills. It’s kind of forming the student into that next level where they are going to carry on for the rest of their lives.”

Not only that, but the FFA experience, and specifically this most recent service project, was a nice way to bring FFA’s week to an end.

“It’s a great way to wrap up FFA Week,” Ryan said. “You’re actually able to reach out into the community just to help people. There’s not some particular end goal.”

The group is also hoping it’s a foundation for growth. With a hefty number of seniors leaving the program after this year, AHS’ group will be down to just a handful of members.

Ideally, Schechinger said they like to have a group of at least around 20 members. That’s another avenue in which the service projects can become important, because it’s an opportunity to show younger students what the FFA is all about.

“Hopefully we can go to Ellis before this year ends just to talk with them about FFA,” Abby said with Ryan putting in: “Share the awareness about the program.”