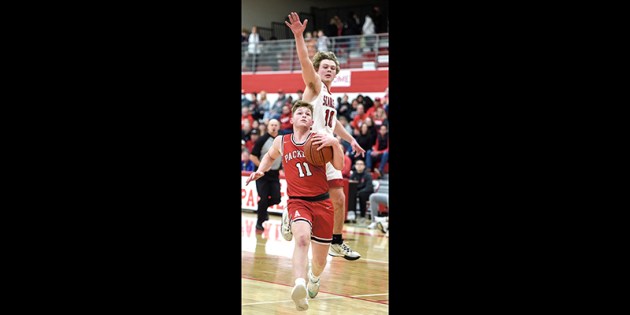 Austin’s Gage Manahan takes a run to the hoop ahead of the defense of Mankato West’s Andrew Franke during th first half Friday night in Packer Gym. Eric Johnson/photodesk@austindailyherald.com 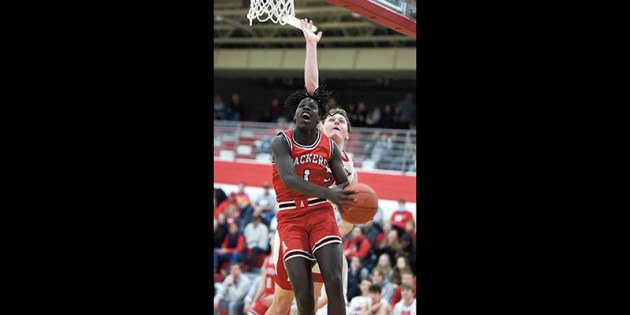 Austin’s Cham Okey with the underneath shot during the first half against Mankato West Friday night in Packer Gym. Eric Johnson/photodesk@austindailyherald.com 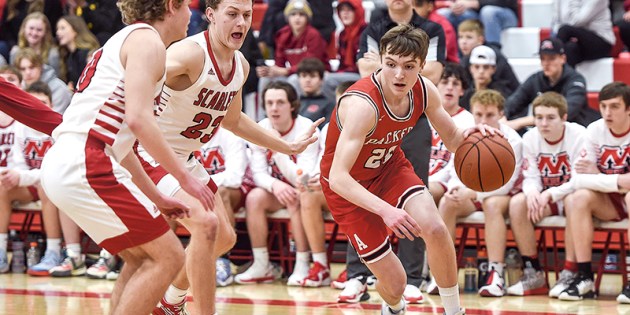 The Austin boys basketball team closed out its regular season against a tough, physical Mankato West squad and the Scarlets topped the Packers 74-65 in Packer Gym Friday.

Austin (14-12 overall) took a 45-43 lead when Buai Duop hit a three-pointer, but the Scarlets responded with a 20-5 run that put the game out of reach down the stretch.

Louis Magers put up 23 points and eight rebounds for the Scarlets (19-7 overall) and Mehki Collins, who has committed to play wide receiver for the NDSU football team, had 19 points, three rebounds and seven assists.

Collins made a big difference as a playmaker in the second half.

“They haven’t beaten us in quite a while and I’m sure they came in with the revenge factor and they played extremely well,” Austin head coach Fadness said. “We played really well in the last eight minutes of the first half, but when Mehki Collins got in the middle of the floor, he made plays. That was a problem for us in the second half. He and the Magers kick are special athletes and they killed us on the glass.”

Austin will host a Section 1AAA Tournament Quarterfinal at 8:01 p.m. Tuesday and Fadness is hoping his senior class can go out on a high note.

“Gage Manahan has had a terrific senior year and he’s somebody we can count on every night,” Fadness said. “Victor Idris is a special athlete, Kaden Murely battles and he’s a fighter out there, and Jared Lillemon has been able to knock down some threes. Othow Gari also played well for us. I’m hoping things go well for our seniors in the playoffs. They’re good young men and they work hard.”