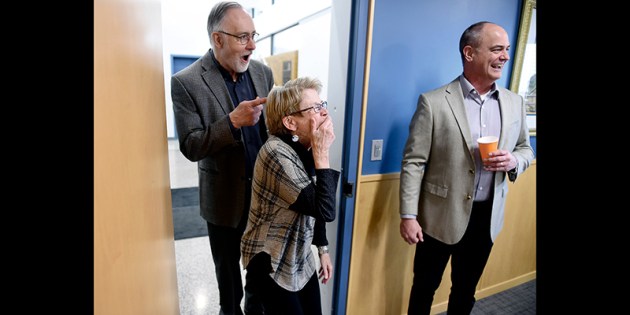 Former Austin Mayor Bonnie Rietz reacts to the people waiting for her and husband Tim Rietz inside the newly named Bonnie Besse Rietz Conferenece Room Monday at City Hall. The room was named in honor of Rietz who served as Mayor for 10 years. Eric Johnson/photodesk@austindailyherald.com 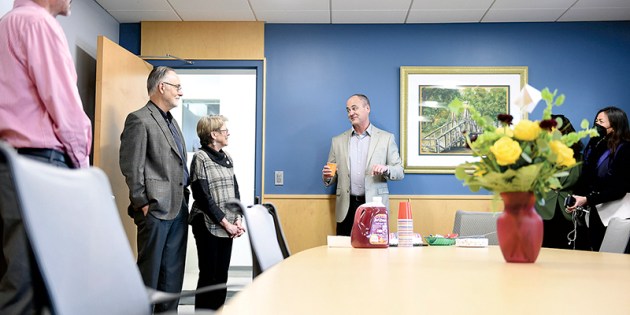 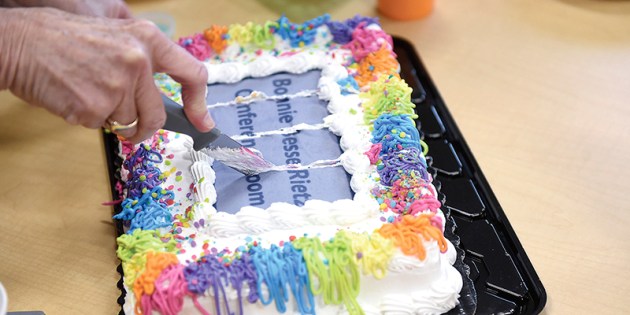 Bonnie Rietz cuts the cake during the dedication of the conference room at City Hall in her name Monday afternoon. Eric Johnson/photodesk@austindailyherald.com

For 10 years, Bonnie Rietz served as mayor for the City of Austin. Late Monday afternoon, she was honored for that service when the conference room at City Hall was formerly named for her — The Bonnie Besse Rietz Conference Room.

“Bonnie will always be the mayor of Austin,” said current mayor, Steve King, who is in his first term and spoke to Rietz’s lasting legacy not only as mayor, but in her current service to the city. “It’s in her heart. She just can’t turn this off.”

Friends, family and current city and county employees showed up Monday to honor Rietz, who served as mayor from 1997 to 2007.

King credited Rietz as being a major part of helping grow Austin to the community it is today.

“What a gift she’s been for Austin,” King told those in attendance. “If you look back at how [Austin] transitioned, it transitioned because of Bonnie.”

A tireless champion of Austin, Rietz has continued in several roles to serve Austin, including as current vice chair of The Hormel Foundation.

She said that Monday’s ceremony was a nice way to revisit her cherished time both as mayor and in the work she has done since and continues to do.

“I loved being mayor, but I also love being a former mayor,” she said. “I really enjoy being involved in the community. I love Austin.”

However, she admits to being somewhat taken aback when King first approached her about the honor.

Not long after she walked into the room, Rietz took the opportunity to say that she was only a part of a community with talented and caring people who find ways of contributing to Austin in a leadership role.

“It’s so wonderful the leadership … look at the city now, it kind of seems like wonderful people step-up,” she said.