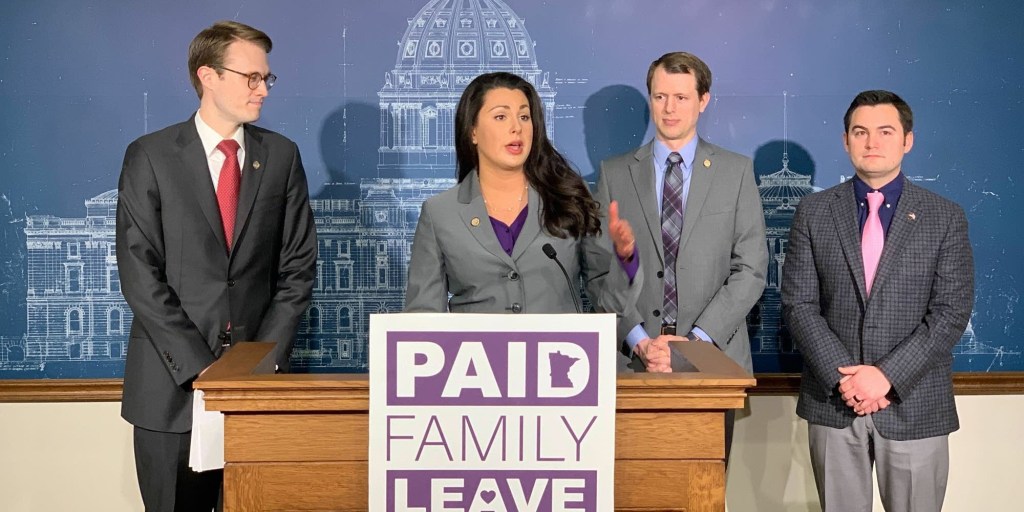 Sen. Julia Coleman, R-Chanhassen, and some of her Republican colleagues propose a paid family leave plan at the Capitol on Monday, March 21. Brian Bakst/MPR News

Until now, paid family and medical leave proposals at the state Capitol had been a largely one-sided affair. Democrats have pushed unsuccessfully for years to create a government program that would guarantee paid time off to bond with a child or care for a sick family member.

But on Monday, legislative Republicans threw a new plan in the mix that’s rooted in private insurance and gives incentives to businesses through tax credits.

While some Democrats called the GOP plan inadequate, DFL Gov. Tim Walz welcomed the proposal as a sign that debate on family and medical leave will now get serious.

The GOP proposal came from Sen. Julia Coleman of Chanhassen, one of the Legislature’s younger members with three young boys at home in Waconia to keep her busy.

“When I was pregnant with my first son, I worked for a small company that was only able to offer short-term disability in order to survive the hit to my income,” Coleman said. “Instead of resting after a long day of work. I would moonlight doing odd jobs in order to support my family while I recovered.”

That’s why Coleman said she is interested in finding common ground on paid family leave — something many of her Republican colleagues have argued should be left to market forces.

The plan Coleman and a few others offered would permit the creation of an insurance product that’s currently not allowed in state law. Businesses would be able to customize their benefits, deciding what to cover, for how long and whether employees would share in the cost.

Small employers — those with 50 or fewer workers — could qualify for tax credits of up to $3,000 per worker.

“They want to offer this benefit. But it’s expensive, and it’s hard to do,” Coleman said. “And so the larger companies that can afford paid family leave already have great policies in place. And this is going to enable them to compete with those companies.”

The pot of $50 million for tax credits — a starting point, Coleman said — would be enough for fewer than 17,000 employees if all eligible companies got the maximum.

According to the Department of Employment and Economic Development, about 927,000 people work at companies of that size.

Sen. Susan Kent, DFL-Woodbury, has sponsored the DFL version to set up a state-sponsored program funded through payroll taxes that would be open to nearly all workers. The Republican proposal with an opt-in system would still leave too many employees without a benefit they deserve, Kent said.

“It’s a cumbersome workaround to try to pretend like we’re addressing a very real issue without actually providing the type of benefit and support that families need,” Kent said.

Republicans don’t like Kent’s proposal and a mirroring bill that the House has approved because they say it would cost businesses too much and leave them with a one-size-fits-all option.

“That would actually risk private plans that are currently being offered in the marketplace that both employees and employers are happy with versus our proposal today that allows employers and employees to create an insurance product that meets their needs and their budgets,” he said.

“I don’t think you can shut down when somebody makes a move,” the DFL governor said. “This is the first time we’ve heard Republicans talk about it, they have shut this down and said that they absolutely never, it’s a new tax on employers. We don’t want to do it, we’re not going to deal with it.”

Coleman’s bill is modeled after similar plans she said have been established elsewhere, most recently in Virginia. The bill got its first Senate hearing Monday but has a ways to go before negotiations can start in earnest.

Lt. Gov. Peggy Flanagan said the administration has been pushing for something since day one and is anxious to talk.