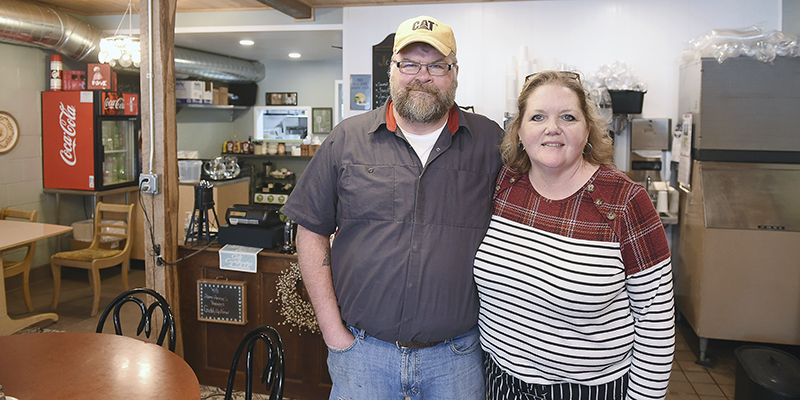 Christ and Diane Nyhus sets up Alamo Annie’s Homestyle Eatery in the community that has supported them. Photos by Eric Johnson/photodesk@austindailyherald.com

Something strikes a chord when you walk into Alamo Annie’s Homestyle Eatery in Brownsdale.

The friendly atmosphere  with a sense that you are visiting grandma’s house lends a significant charm to the establishment as soon as you walk in. You feel like you’re home and that’s exactly how husband and wife team Christ and Diane Nyhus want you to feel when you sit down for one of Diane’s homestyle meals. 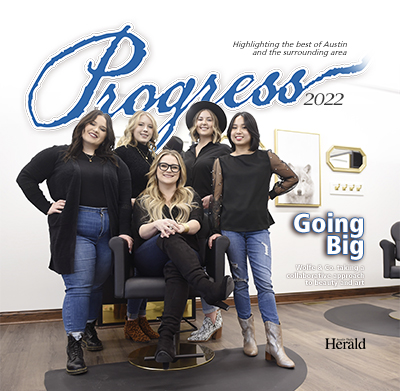 Get your copy of Progress 2022, filled with stories from Austin and the surrounding area.

“We wanted to have that old time feeling,” Diane said as both she and Christ sat down at the end of a busy day. “Like you’re going to your grandma’s or your mom’s.”

Just eight weeks into the business’ life and Alamo Annie’s was already at home in Brownsdale, but maybe that’s because, in a way, it’s a kind of homecoming of sorts for Nyhus, though there are some in the community who might say she never left.

Diane has been working in small towns and small town cafes for around 35 years. After some time in Austin and then another few years in Wisconsin, where her family is from, Diane moved back to the area and began working at the Langtry Cafe in Brownsdale. 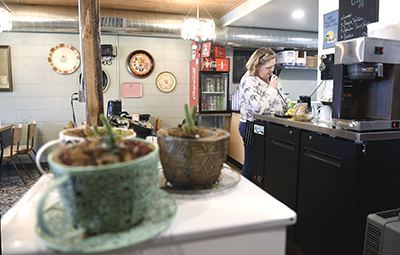 Diane Nyhus answers a take-out order at Alamo Annie’s in the heart of Brownsdale. The homestyle eatery has seen plenty of success since opening late last year. Eric Johnson/photodesk@austindailyherald.com

“I would leave the doors open and people would run across the street and pay,” Diane remembered. “Sometimes I had somebody watch the store, but if I didn’t I would just say come to the restaurant and pay.”

The antique store eventually closed and was used for storage, but after marrying Christ in 2015, the couple began putting work into the building once again, including the apartment.

But talk eventually kept turning to the idea of an eatery.

It took a furnace going out to finally push them in the direction they are in today.

“We called MJ O’Connor,” Christ said. “They came in, threw a furnace in for us and then Diane and I just started gutting.”

“We just decided we’re going to do it,” Diane added. “We talked about it and talked about it. I know, in the middle of a pandemic is kind of strange, but I’ve always wanted to do it.”

It certainly wasn’t easy, but the couple held true because they knew they were supported by a community eager to have a place to dine and come together.

“I have a great love, and Christ has also acquired a great love, for the community,” Diane said. “The people here are wonderful.” 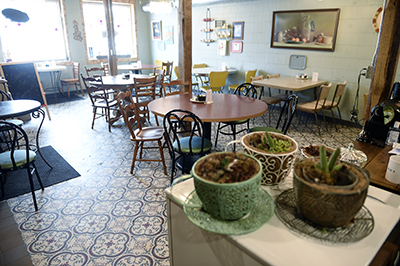 A meal at Alamo Annie’s Homestyle Eatery is like going home to mom’s house.

The couple set to work, bringing in Ken Davis Construction for most of the construction work, MJ O’Connor who did all the plumbing, Matyas Electric handled the electrical work and Superior Mechanical took care of the HVAC needs while Jason Culbert and Pat Campbell did the tiling and linoleum work respectively.

Mark Owens was the architect of the work.

Alamo Annie’s held a soft opening the Tuesday and Wednesday before Thanksgiving, putting no more word out other than a sign that said “Open.” However, the following Tuesday after Thanksgiving the restaurant was fully open.

“We’ve learned a lot of things and I think that improves over time,” Diane said with Christ adding, “We’ve made some changes for efficiency and then added a few things.”

From the very beginning Diane and Christ settled on a unique model for Alamo Annie’s. For one, there is no ansul system or deep fryer. It required too much regulation and having the apartment above the kitchen put the idea out of reach.

Rather, Diane fell back on her time working in cafes. She noted a specific observation and put it at the center of Annie’s.

“I worked in small towns, small cafes for 35 years and mostly, I would say the vast majority, they order the special until it’s gone,” Diane said. “They don’t even ask for a menu unless you are out of the special.”

To that end, the menu is confined to three dishes in the morning and three over the lunch hours. In fact the only item they make to order are paninis because of the panini press they have.

Diane comes in before 4 a.m. in the morning, preps the food for the day and stores the food in a steam table and serves when ordered.

“I tell people, it’s like going to your grandmas,” Diane quipped. “You get what you get and don’t have a fit.”

The one constant is biscuits and gravy in the morning with a plate special for lunch. The other familiar dish people will find is a chicken salad, which can come in a variety of flavors and arrangements.

However, one must not forget the homemade cinnamon rolls as big as a plate and topped with luscious icing. Enjoyed warm and it’s just about the best thing you’ll have all day.

One thing that stays consistent through the meal planning is the fact that all of the dishes Diane and her brother, Ernie Hix, make are from scratch. There is nothing pre-made.

“Almost all of the things we make are things that I learned growing up,” Diane said. “I’ve been working very hard in writing down the recipes because I cook … I just cook.”

Diane and Christ are happy where they are, open 6:30 a.m. to 2 p.m. Tuesday through Saturday, and are entertaining  just a few ideas in terms of growth.

While ruling out opening at night, Diane would like to eventually see the eatery offer a pie and coffee hour as well as a take-and-bake aspect to the business. A convenience for people who either don’t have time to cook or maybe forget to have something prepared.

“When Diane and I discussed prepping, making meals, cooking them the way we are doing them — it’s perfect for to-gos,” Christ said. “It’s perfect.”

For now, Alamo Annie’s is going to enjoy the support of a warm and caring community. In just the short amount of time they’ve been open, the eatery has already built a loyal customer base, filled with plenty of repeat customers.

“We have regulars,” Christ said. “We have a lot of regulars. They come in for breakfast, they probably put gas in their car and they probably come back for lunch.”

Large farm operations around the area have also been repeat customers, there’s a graduation party already planned and area Shriners have expressed interest in Alamo Annie’s doing a dinner every once in a while.

“They love it that they have a place where they don’t have to go all the way to Austin,” Diane said. “The older population, I think, love to go out and see their neighbors in different places. It’s a sense of pride.”