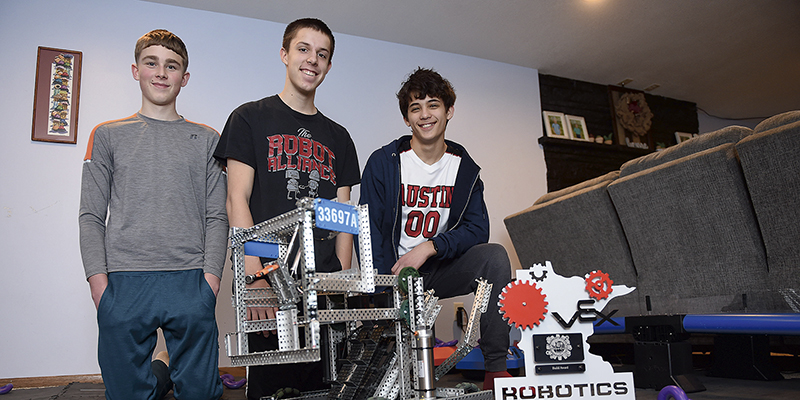 Daniel Grush, from left, Abe Phillips and Eric Blust are members of an independent robotics team from Brownsdale that will be competing in national and world competition. Photos by Eric Johnson/photodesk@austindailyherald.com

Walk down into the basement of Clint and Nikki Phillips’ home in Brownsdale, and you’ll witness a fairly out-of-the-ordinary site for a family dwelling.

A modified robotics competition mat, where the middle school independent team Robot Alliance, made up of Abe Phillips, Daniel Grush and Eric Blust, hone their own creation for competition. The robot is guided around the mat, picking up rings and tossing them on the goal being carried on the robot’s back. Simply landing the ring on the goal scores points — landing the ring on the post at the goal’s heart draws more points. 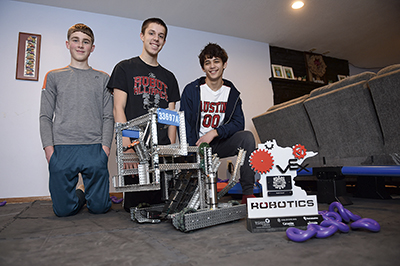 Daniel Grush, from left, Abe Phillips and Eric Blust are members of an independent robotics team from Brownsdale that will be competing in national and world competition. Photos by Eric Johnson/photodesk@austindailyherald.com

“Oh yeah,” Phillips said. “Our first year we knew absolutely nothing and we did very badly. We got dead last in one tournament and second to last in another one.”

But those first tournaments proved to be a launch pad for the independent team. Phillips is home-schooled, while Grush and Blust attend public school.

Because the team is independent there is no backing from a school leading to fundraising and business donation.

In the face of this, the achievements the trio has reached in just a few short years is nothing less than astounding.

“We went from being the absolute worst to being one of the best teams, which was amazing,” Phillips beemed. 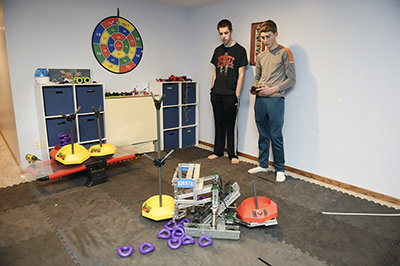 Daniel Grush, right, guides the robot as teammate Abe Phillips watches in the basement home of the Phillips in Brownsdale on Wednesday. Photos by Eric Johnson/photodesk@austindailyherald.com

Phillips formed his team after participating in IQ robotics at Neveln Elementary, where his dad Clint is a teacher. The fairly rudimentary robotics program designed for younger kids was a spark.

They ordered their first robotics kit, but it didn’t arrive until after the season had already began. But they were ready for the next year, which was their first.

Phillips’ mom and team coach, Nikki, remembered seeing the team perform that first year along with the hurdles and the struggles. But she also remembered the pride at seeing them make each step.

“I remember [the] first year, they got a one-point autonomous  on a practice field to work,” Nikki said. “They didn’t even get it to work during the match, but I cried because I was so proud of them. Just because he learned to code something for real.”

Last year’s schedule was truncated by the COVID-19 pandemic, giving the team very little opportunity to compete with other teams.

“Last year was all virtual, which was really weird,” Phillips said.

But now they are set and after winning over 43 teams at a Mankato tournament this year, they earned their slot in the state tournament and after that qualified for national and world competition.

Grush is the robot’s pilot, guiding the machine about the competition area when its not programmed for autonomous competition. 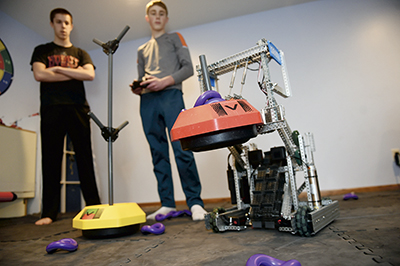 The team’s robot takes part in several different parts of competition, which includes scoring points by getting rings on this goal. Eric Johnson/photodesk@austindailyherald.com

“It’s really fun to drive in competitions,” he said. “Just being up there and having fun, trying to put rings on there and stacking goals.”

There are various areas that the robot and the team competes in. Manual and autonomous (coded routes that tell the robot where to go), a skills area where the competitors are scoring points on their own, competition, judged divisions and engineering notebook where the team is interviewed by judges.

Taken all together, it’s been an enriching experience for them to be a part of.

“It’s been really fun,” Grush said. “We’ve definitely improved our robot a lot from our first little [robot] that we had.”

To help get them to this point, the team has made good use of collaboration, especially with the Southland robotics team, which has enjoyed a large amount of success over the years and has its own dedicated room at Southland Public Schools after the remodel a few years ago.

The Brownsdale team will take their robots over to Southland every so often to practice.

“They ask other teams from other schools,” Nikki said. “Paula Mortenson down in Southland has been a huge help to us. We’ve gone down there a few times, she’s given us tips and  just really helped us so much. I appreciate her a lot.”

The US Open will take place on March 31-April 1 and 2 in Council Bluff, Iowa, with the Vex Robotics World Competition taking place on May 2-5 in Dallas Texas. The team is currently operating a GoFundMe page and they are also holding a fundraising event at Pizza Ranch on April 11 where tips go to the team and will help them pay for their upcoming trips to competition.

While it’s been fun watching the team develop and grow, for Nikki, it’s also the promise of what the team can become.

“Now to see them do a 30-second program, that’s a lot of code to write and to see it execute 80 points, and now he’s working on one that’s even harder,” she said. “It’s just crazy how much they’ve learned in three years. This is a middle school team.”

“It’s been amazing to watch them,” she added. “They’ve done it all of themselves.”