Packers rebound from slow start to take down Tigers 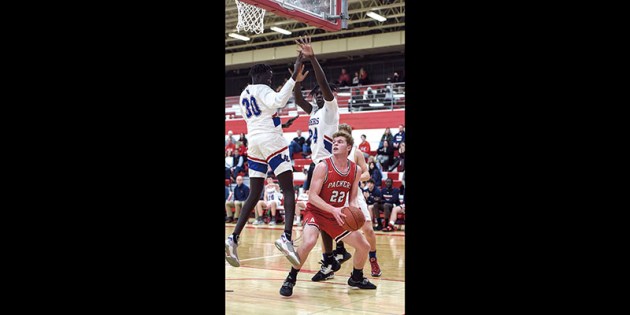 Austin’s Kaden Murley works under the basket against Albert Lea in the first round of the Section 1AAA Tournament Tuesday night in Packer Gym. Eric Johnson/photodesk@austindailyherald.com 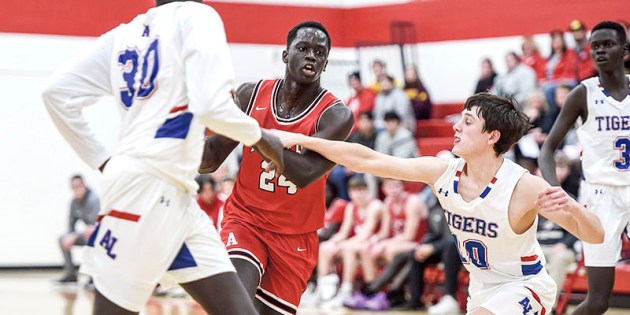 The No. 1 seeded Austin boys basketball team didn’t come out with playoff intensity, but the Packers found their flow in the second half as they beat No. 8 Albert Lea 76-39 in a Section 1AAA Quarterfinal in Packer Gym Tuesday.

Jared Lillemon hit a pair of threes during the rally.

Austin head coach Kris Fadness was hoping his team would’ve started with the intensity that it showed during its second half run.

“The first half was sloppy. I was very disappointed with the way we approached this game,” Fadness said. “I tried to get them to understand that it’s a playoff game and one bad game and you’re done. We were tentative on our early possessions and then we were trying to make highlight plays. This is not the time of year to do that, and we let them hang around.”

Victor Idris had his way in the paint for the Packers as he put up a double-double with 18 points and 10 rebounds. Idris was able to finish a flurry of strong two-handed dunks against AL’s defense.

“No one can stop me. I’ve just got to play my game,” Idris said. “Once we lose, we’re done. It’s senior year, so we’ve got to rock it out and play our best to try to get to the state championship.”

Gage Manahan gave the Packers a lot of energy from the point guard position as he tallied 12 points, eight assists and six steals. He said Austin needs to play as a unit to stay focused on the postseason.

“It’s all about roles,” Manahan said. “I’ve got to protect the ball and make passes and Victor’s a big rebounder and scorer for us. We all have to play our role.”

Buai Duop came off the bench to give the Packers a big boost as he finished with six pints and eight rebounds.

Austin will host No. 4 Kasson-Mantorville in a Section 1AAA semifinal at 7 p.m. Saturday.

“We’re going to have to be a lot sharper and play every possession,” Fadness said.