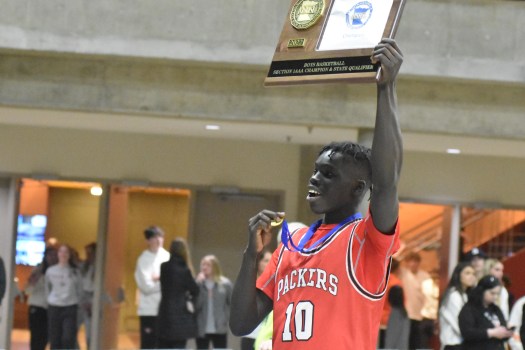 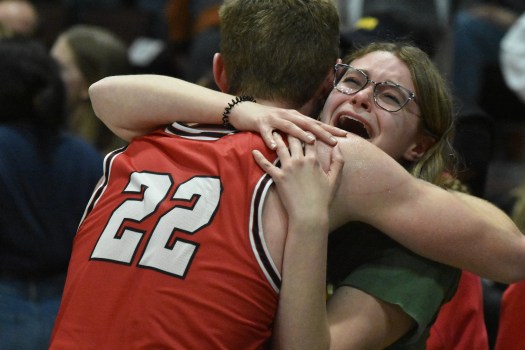 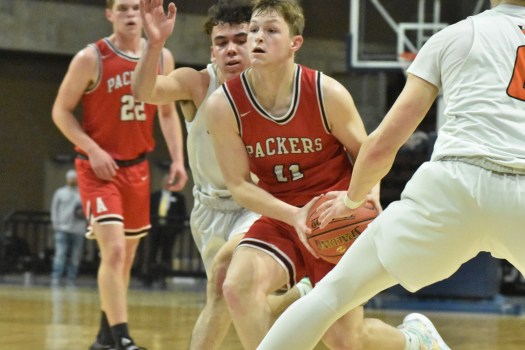 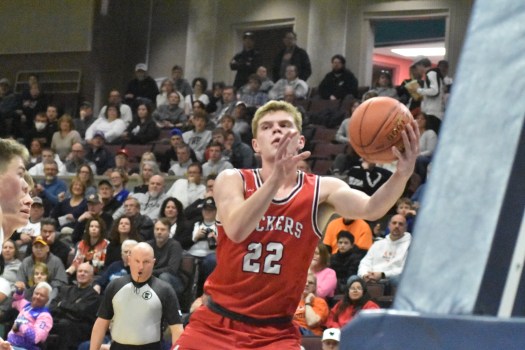 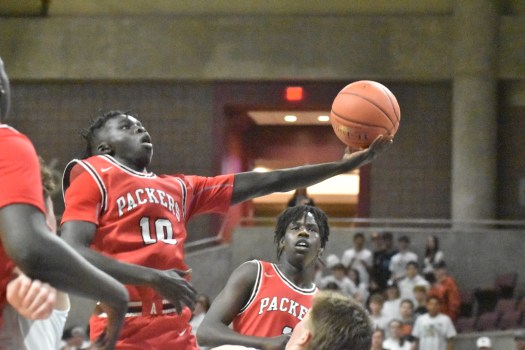 Austin's Ater Manyuon glides in for a scoop shot against the Winhawks in Mayo Civic Center Friday. Rocky Hulne/sports@austindailyherald.com 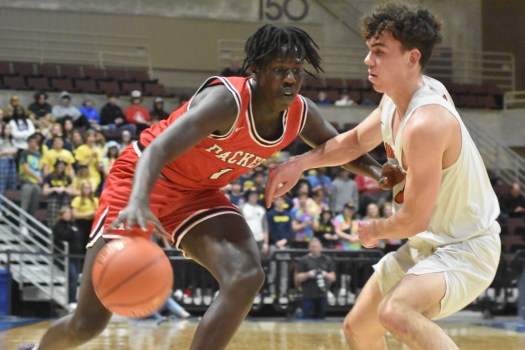 ROCHESTER – The Austin boys basketball team has been up and down this year, but the Packers came together at the right time as they disposed of Winona 46-39 to win the Section 1AAA title and clinch the Packers’ first trip to state since 2019 in Mayo Civic Center Friday.

Austin’s defense was the key to the victory as the Packers didn’t let up the entire night. Winona averaged just a shade over 59 points per game this season and the Winahawks were only held below 40 points once in the regular season, but the Winhawks (18-11 overall) had a tough time getting to the hoop against Austin.

Although the Packers (17-12 overall) have a rich history in basketball, this will be the first state tournament experience for the entire team.

“We had some moments where we struggled to score, but it all came down to perseverance and doing what we do best,” said Austin senior Gage Manahan, who had seven points, four rebounds, three steals and four assists. “It feels great. I felt like we had kind of an off season this year with some young guys, but I think next year, they could do the same thing. I think it’s all about legacy.”

Austin struggled to ice the game in the final push as it went just six-for-17 on free throws, while committing a turnover in the final two minutes.

“It was nerve racking,” said Austin junior Cham Okey, who had 10 points. “I just wanted to win. I’m excited to be going to state and it’ll be a new experience.:

Austin head coach Kris Fadness was proud of his team’s effort against a tough Winona team that his squad beat three times this season.

“We kept playing D and we didn’t have a let down. I thought we did a much better job in the second half of rebounding,” Fadness said. “Defensively, we were very active tonight. We contested most of their shots and we had a lot of blocked shots. They played so darn hard, and I’m proud of our guys to beat a good team like this three times. That’s pretty special. Victor Idris was a force around the basket defensively and Kaden Murley is a bulldog at the basket.”

Austin went on a 10-0 spurt early in the second half as Jack Lang and Gage Manahan capped the rally with back-to-back threes to put the Packers up 29-16 with 12:36 left. The Winhawks would get no closer than nine the rest of the way as Austin’s defense dominated the game.

The Packers used a 12-0 run over six minutes to take a 14-5 lead on Winona in the first half, but the Winhawks were able to get back within 16-13. Cham Okey gave Austin some momentum going into the break when he drilled a baseline three at the buzzer off a dish from Gage Manahan to make it 19-13.

“We can’t let the really good players go off on us,” Okey said. “There are a lot of great players at state and we need to stop them.”

Fadness, who is stepping down after the season, will now coach his final game at the state tournament.

“When you’re a little boy growing up in Minnesota and you want to be a Minnesota Gopher, the next best thing is coaching there. It’s pretty special,” Fadness said.