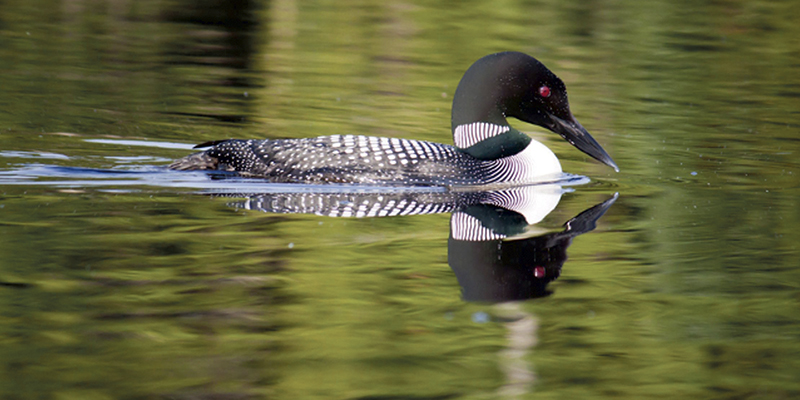 On a calm summer evening, the lake at my grandparents’ house shimmers faintly in the fading light, revealing only silhouettes of boaters passing by on their way home to dinner. A much smaller figure appears on the water, almost as if by magic. If its silhouette wasn’t clue enough, the call that comes from its direction a second later confirms my suspicion; the common loon — our state bird and symbol of northern lakes — floats along the lake’s surface, its distinct and hauntingly beautiful voice echoing across the water.

Although it’s not yet summer, April brings with it the return of the loon, starting in southern and central Minnesota. In winter, common loons make coastal waters their home along the Atlantic, Pacific, and Gulf of Mexico coasts, but by April they are ready to return up north, stopping along lakes in southern and central Minnesota along their migration.

With the common loon chosen as its state bird in 1961, Minnesota is home to more loons (about 12,000) than any other state except for Alaska. But for such an abundant and well-adored bird, the common loon may be in danger of disappearing. Although not listed as a threatened species or even a species of concern in Minnesota, a combination of threats — namely human-caused disturbances like climate change, shoreline development, and lead and mercury pollution — will pose a danger to our beloved state bird in the coming years.

I certainly hope that I will be able to hear the call of the loon throughout my entire lifetime, and that generations to follow will share that same wonder of seeing loons magically appear on the water. In order for that future to become a reality, however, we will need to make changes to conserve and protect the loons: changes that start with awareness.

Mercury and lead pollution, for example, are serious yet avoidable threats. The biggest source of mercury pollution comes from burning fossil fuels, especially coal, which releases mercury into the air and eventually makes its way into water bodies through rain. Mercury poisoning affects the nervous system of loons, and is passed on from adults to the eggs, meaning the chicks will be born with higher levels of mercury than their parents (a similar effect to that of DDT on eagles). The result of mercury intake is reproductive failure, ultimately endangering the future of the species. Likewise, a loon that has lead in its system — usually due to eating fish that have ingested lead sinkers — will result in death in a matter of weeks.

The Department of National Resources, Minnesota Pollution Control Agency, and others have undertaken the monitoring of loon populations in Minnesota to better understand these threats and what is needed for these birds to continue thriving in our state. Currently, 20% of loon deaths are caused by lead poisoning, and a lot of that is attributable to preventable human actions.

Common loons are special for more than just their symbolic and cultural significance in Minnesota, and are anything but “common.” They are expert divers, diving for about 45 seconds on average; even their chicks can dive for 30 seconds starting at a mere eight days old! They are one of few birds to have solid — not hollow — bones, with the added weight helping them to dive as deep as 250 feet. Even though they spend a lot of time in water, they can fly more than 75 mph once airborne! With such a magnificent creature at stake, the common loon deserves our attention, care, and conservation efforts in order to preserve its future.

Saturday: Friends of the Nature Center Rummage Sale. Open to the public at Ruby Rupner Auditorium,  9 a.m. to 4 p.m.