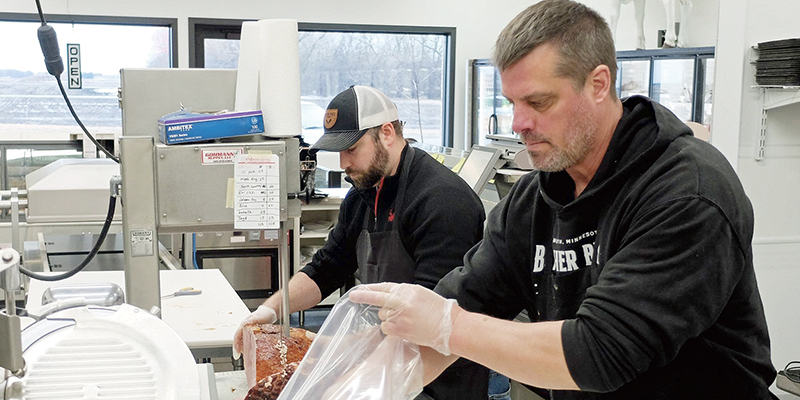 A years-long decline in local meat processing is showing signs of reversing in Minnesota.

Nearly two dozen small meat-processing facilities have opened since the start of the pandemic, including Butcher Block Meats, which opened last August in Dilworth, just outside of Moorhead.

On a recent morning, manager Jake Thoemke cut large hams into ham roast and steaks before the shop opened.

No animals are slaughtered here. The store buys large cuts of meat from other facilities and employees cut it into consumer-sized portions.

“Like your ribeye loin is going to come in, those are like 18 pounds. And then you just cut your ribeyes out,” explained Thoemke.

He says his customers want to know more about the meat they buy. And that means he has to spend some time educating people who, for example, want to buy half a beef.

“I’ve literally had people ask me, ‘Hey, can I get a half, and can I get most of it turned into ribeyes?’ And I’m like, “Well, that’s not really how it works,” said Thoemke.

Teaching customers about the different cuts of meat helps them be more informed consumers, he said.

About 3 miles away in Moorhead, another local meat shop opened in January. Melissa Evans runs She Said Butcher Shop.

She has also seen strong consumer interest in just a few months of being open. Evans has plans to expand her business by adding a smokehouse and outfitting a custom space that would allow her to cut up full animals for individual customers.

“I have the space for custom processing, I need the equipment for it,” said Evans.

But that’s a big investment.

“I need a rail system, more tables, another grinder, all that stuff is really expensive. Stainless steel, it’s spendy,” said Evans. “So I’m just working on expanding and getting some of those things so I can get into the custom processing, and start doing half cows, whole cows, pigs, deer, elk.”

She’s applying for state and federal grants to help fund the expansion. She sees it as a long-term investment in the Moorhead neighborhood where she set up her business.

Thoemke in Dilworth agrees that the cost of getting started in the business requires a long-term approach.

“It takes a lot of ribeyes to make your money back here. You kind of got to settle in for the long haul,” he said. “This is not a get-rich-quick scheme.”

If Evans can move ahead with her expansion plans, she will need two or three new employees. It might be easier now to find those skilled workers than it was just a couple of years ago.

North Dakota State College of Science in Wahpeton, N.D., an hour south of Moorhead, started a meat-processing program last fall. Two Minnesota technical colleges plan to start meat-cutting programs later this year, and according to one official, there is strong student interest.

In January 2020, Minnesota had 231 custom exempt meat-processing facilities. Those are generally smaller operations that process animals for individual consumers.

“Two years later in 2022, on Jan. 1, we had 251,” said Levi Muhl, meat and poultry inspection program manager with the Minnesota Department of Agriculture.

“So we’ve opened 20 new, custom exempt establishments here in Minnesota, which provides a significant increase in processing capacity across the state.”

“We foresee that demand continuing to go down that road, being in touch with your local processor and your local producer,” he said. “None of us can predict the future, but we are fairly hopeful and positive that will continue to increase.”

A bill at the Minnesota Legislature would add funding to offer meat-processing training to high school students.

Eric Sawatzke, an ag education instructor at West Central Area Schools in Barrett, Minnesota, testified in favor of the bill. Sawatzke has applied for grants and is working on plans to develop a training model.

“To build a facility that is ready for food-safe food processing that’s following standards and guidelines that you would see in any kind of a butcher shop, and give our kids a little bit of a dabble into what it’s like to process their own meat,” said Sawatzke.

Students are interested, says Sawatzke, but haven’t had a chance to explore the potential career in the past. His plans also include a facility to process locally grown produce as a way to decrease consumer dependence on food that’s shipped in from thousands of miles away.

“This is one of those opportunities that we have to help to provide a kind of a guarantee at a local level that there’s going to be the food available when you need it,” he said.