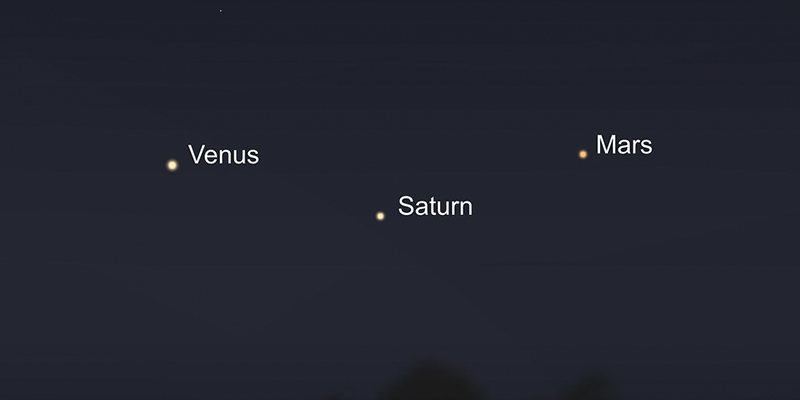 As its namesake month begins, Mars glimmers below brilliant Venus in the predawn sky. To the right (south) of the planets sits the Teapot of Sagittarius, while the curved Teaspoon of stars hangs above and between the Teapot and the planets. Moving south again, look for the sinuous form of Scorpius and its red heart, Antares. 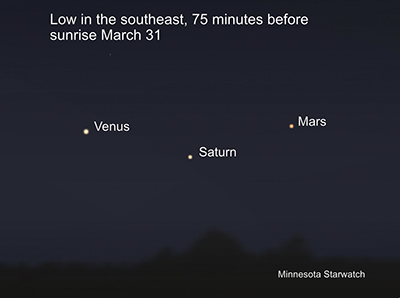 Mars inches upward all month long, and Saturn climbs over the horizon in mid-month. The ringed planet passes below Venus between the 27th and 28th, and ends March below and between its two fellow planets. A waning moon visits Antares on the 23rd, then sails toward the planets. On the 28th, a scrawny old crescent moon rises below the three planets. But to see all four objects, you’ll have to look soon after moonrise, or the sun will have washed out at least some of the planets.

In the evening sky, the large knot of bright winter constellations makes its last stand in March. If you haven’t seen them, look to the south to southwest at nightfall. Enjoy Sirius, in Canis Major, the big dog, at the bottom of the group, then look up to brilliant Capella, at the top in Auriga, the charioteer. The starry assemblage is so tall, you’ll have to lean your head back to see Capella.

March’s full moon shines the night of the 17th-18th from below the tail of Leo, the lion. As the night goes on, the moon and the lion seem to drive the winter constellations westward.

The spring equinox arrives at 10:33 a.m. on the 20th. At that moment, the sun crosses the equator into the northern sky and an observer in space would see Earth lighted from pole to pole. Also, the spring equinox ushers in six months during which the day length increases as we travel north. And even if we stay put, we experience the fastest increases in day length near this equinox because it’s the time of year when the sun moves most rapidly northward.