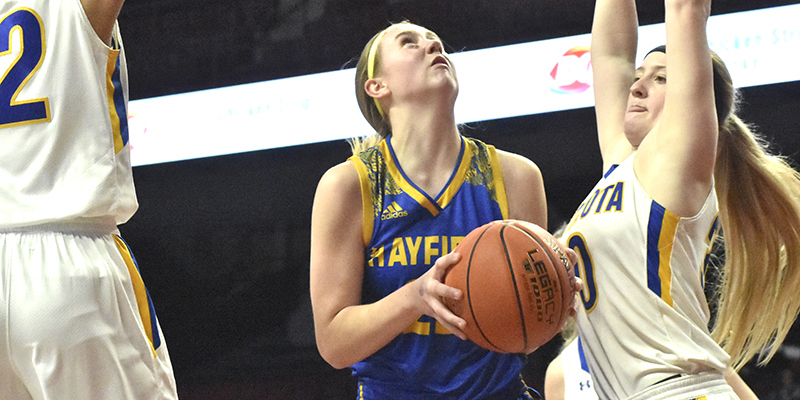 MINNEAPOLIS – It took a few things going very wrong for the Hayfield girls basketball team when it finally suffered its first defeat of the season in a 53-45 loss to Minneota in the Minnesota Class A Girls State Basketball Tournament semifinals in Williams Arena Friday.

Hayfield (32-1 overall) wasn’t able to overcome a bad combination of foul trouble, shooting struggles and a tough time on the boards in the loss.

With two of its starters battling foul trouble throughout the second half, Hayfield hit a scoring slump at the wrong time as the team had just one field goal in the game’s final seven minutes, and that didn’t come until McKenna Chick hit a three to bring her team to within 51-45 late in the game.

“We built a nice (first half) lead, and then for a little bit it seemed like every call went against us,” Hayfield head coach Kasey Krekling said. “There were charges that I don’t agree with, but that’s part of the game. Then we got in foul trouble right away in the second half and unfortunately we just didn’t have enough offense.”

Natalie Beaver had a three-point play to bring Hayfield within 44-42 with 7:13 left.

Watson, who likes to play aggressively on offense and defense, had to adjust her approach due to being in foul trouble for much of the day.

“It changes the game a lot, and it hurt us a lot. I couldn’t drive when I needed to and I couldn’t take over,” Watson said. “I had to back off on defense and I wasn’t able to get as many steals.”

Minneota was able to wear down Hayfield on the boards in the second half as they had plenty of possessions where they were able to get up multiple shots. Minneota out-rebounded Hayfield 38-24.

“They’re very physical and we didn’t do a good job of boxing out,” Beaver said. “They were more physical than us.”

Krekling said rebounding and taking charges have been problems for his team all year and both of those issues popped up on Friday.

“Believe it or not, we’ve gotten better at rebounding, but it was frustrating yesterday and it was again today,” Krekling said. “One thing our boys team does so well is they take charges, especially Kobe Foster. We play great defense, but we don’t take enough charges. They took four today and we took zero.”

Hayfield had stayed within one possession for much of the second half and it even led 37-36 after a free throw by Chelsea Christopherson with 9:39 left.

Hayfield started strong, but Minneota had a big answer in the final stretch of the first half.

Beaver, who finished with 13 points, eight rebounds and three steals, went on a personal 8-0 spurt to give Hayfield a 26-14 lead as she hit two threes and converted on a post move, but Minneota was able to crawl back within 26-22 after Rolbiecki capped a 8-0 spurt with a score with five minutes left in the first half.

Minneota put together another 6-0 run to close the half and make it a tie game at 28-28 going into the break.

Krekling, who guided Hayfield’s baseball team to a state title last spring, had his coaching winning streak come to an end at 58 straight wins. He won’t be celebrating a girls basketball title this year, but he’s not calling the season a loss by any means.

“The dream’s not over. It doesn’t end when the season’s over,” Krekling said. “I’ll be there for these girls the rest of their life and that’s how I always view it.”

Hayfield will certainly be in the running next season as its top two scorers – Watson and Beaver – are only sophomores.

“We just have to work in the offseason and push each other to the limit, especially now that we know how good other girls can play,” Watson said.

Hayfield will next play in the third place game at 11 a.m. on Saturday against the loser of Mayer Lutheran and Hancock. The game will be played at Concordia University’s Gangelhoff Center.