Let’s get physical: Packers will have to hit the boards to hang with Princeton 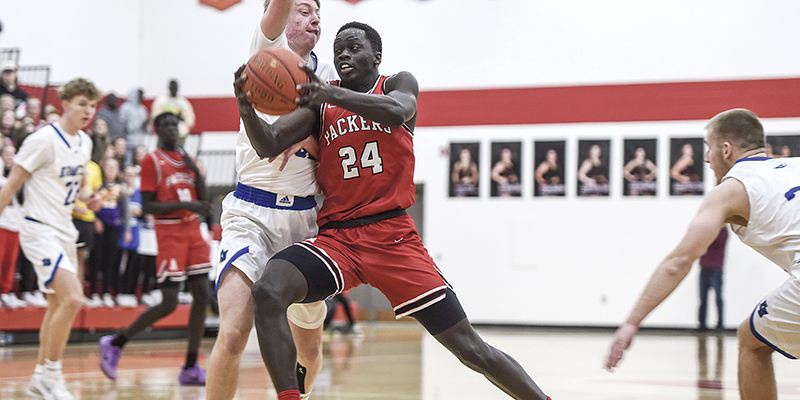 Austin’s Victor Idris drives through the Kasson-Mantorville defense during the first half of their Section 1AAA semifinal game Saturday night in Packer Gym. Eric Johnson/photodesk@austindailyherald.com

Austin head coach Kris Fadness has seen a lot of success with the Packers, but he’s never been in a situation quite like this one.

The Packers will take on Princeton in the Minnesota Class AAA State Boys State Basketball Tournament quarterfinals in Williams Arena at 2 p.m. Tuesday, giving the team just three days to prepare for an unfamiliar opponent. Austin (17-12 overall) is also entering the tournament as a relative underdog against No. 2 seeded Princeton (26-1 overall).

This is the seventh time Fadness, who is set to retire from coaching after the season, has led the Packers to state seven times and this is the first time the team is unseeded since the first time he took them to state in 2012.

“It doesn’t matter. We’re 17-12 and we shouldn’t be seeded,” Fadness said. “I don’t think there’s a team in the state tournament that has a record as bad as 17-12 in any class. But we’re here and we’ve got a puncher’s chance. Princeton’s very good and we’ll have to play very well to beat them, but I think there’s some things we can do successfully against them. Whether or not that results in a win or not, I don’t know.”

The Packers had wild up and down season that saw the high of winning at Mankato East early in the year and the low of losing to Red Wing at home in the middle of the season. But when tournament play began, the Packers cranked up their defense and led from wire-to-wire in all three Section 1AAA victories.

“We always think of sections as the end goal,” Austin senior Kaden Murley said. “If the regular season is bad, we move on from it and we take it one game at a time and one loss and it’s all over. We all put our heads together and we were going to play hard and we were going to take it to them if this is our last run together.”

If the Packers want to pull off a first round upset, they will have to turn down the pace and crash the boards. Princeton has a physical lineup that likes to create second and third chances.

“I think their biggest strength is our biggest weakness and if you play good defense, but don’t get the rebound, it doesn’t matter,” Fadness said. “They also want to play fast and they want a high scoring game. Not that we don’t want to play that, but we don’t want to give them easy baskets. We’re not quite used to that type of style and we’d like to keep the score in the 50s and 60s.”

Austin senior Victor Idris said the Packers are excited to play at Williams Arena, but they know they’re going to have to get tough in the paint.

“Everyone has to rebound, it’s on just one person. It’s going to take all five of us, especially in this game. One rebound could decide the game,” Idris said. “It’s a blessing to play there, especially with the guys that we have. It should be a good game.”

Austin hasn’t played in a state tournament since 2019, which means this will be the first time any of the current players step on the Williams Arena floor. It’ll be a new experience for the team, which hopes to carry the momentum it has built up in the last week.

“We haven’t seen or even heard of a lot of these teams before,” Murley said. “Today is the first time I’ve seen any film on Princeton. We have to adapt to new opponents and play with all our heart.”