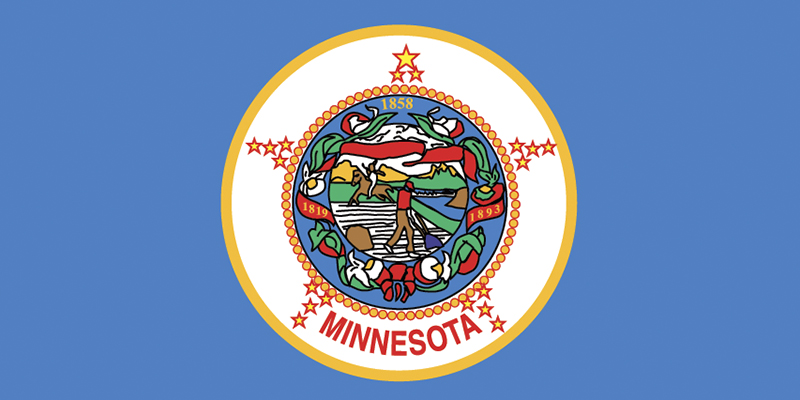 ST. PAUL — Minnesota lawmakers are resurrecting an effort to redesign the state’s flag and seal, which proponents say are indistinct compared with other U.S. states and feature imagery that is offensive to Native Americans.

The legislation, a joint effort by Democratic Reps. Mike Freiberg, of Golden Valley, and Peter Fischer, of Maplewood, would establish a 14-member redesign commission made up of lawmakers, members of the public appointed by the governor and members of the state’s ethnic and indigenous councils. It would also include one member each from the Dakota and Ojibwe communities.

The current flag is blue with the official state seal prominently displayed. The seal depicts a white settler tilling soil in the foreground and a Native American on a horse in the background — a depiction that fails to come to terms with Minnesota’s history of violence against Native Americans, said Kevin Jensvold, tribal chairman for the Yellow Medicine Dakota of the Upper Sioux Community.

“You see a very distinct line that is created by the plowed fields right in the middle showing that there is a division between the European at that time and the Indigenous person, and basically pushing them off into the sunset,” he said. “That way of life, that genocidal attempt to destroy our culture is depicted on that flag.”

Fischer said two high school students came to him in 2017 with concerns about Minnesota’s flag, including its similarity to 19 other blue state flags with seals on them. The flag also uses too many colors, isn’t simple enough that a child could draw it from memory and isn’t distinct enough to recognize when seen from a distance, he said. Those are all guidelines for a good flag provided by the North American Vexillological Association, which ranks Minnesota 67th out of 72 U.S. and Canadian state and provincial flags.

“By creating a commission that could take a look at the state flag design from across our state … we could come up with a very unique design that people would be able to see, draw from memory and when others see it from other parts of the country would be able to recognize that is the state of Minnesota,” Fischer said.

Mississippi recently retired its old state flag that featured the Confederate battle emblem, which is widely regarded as racist and has been used by Ku Klux Klan groups. Their new flag — approved by a majority of Mississippi voters in the 2020 election — is adorned with a magnolia, the state flower, encircled by 20 stars and the phrase “In God We Trust.”

Jensvold called the redesign overdue, and said Minnesota should follow Mississippi’s lead in promptly changing a flag that its residents find racially offensive.

“If we are viewed in the context that we are going to continue to allow that to be displayed at the expense of the Dakota people, that belongs to them,” he said. “They need to justify that.”

The bill passed the House panel Tuesday on a party-line vote of 8-5, though no Republican members voiced comments or concerns before voting. Its future remains unclear in the GOP-controlled Senate, where it awaits a hearing.