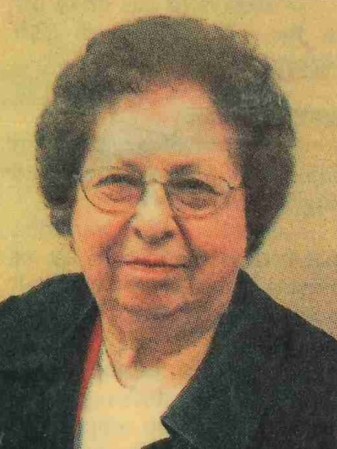 Joyce Avalon Mallory, 98, died Sunday, February 27, 2022, at Sacred Heart Care Center in Austin. Joyce was born on March 21, 1923, to William and Ina (Enright) Hemann. She was the oldest of three children.

After graduating from St. Augustine High School in Austin, she began working at Hormel Foods, January 16, 1942, after the bombing of Pearl Harbor. Joyce continued to work for the company for the next 36 years.

She was married to Jack D. Mallory from 1949 until his death in 1975. Although Joyce and Jack did not have children, “Aunt Joyce” was a mother figure to nieces, nephews, neighborhood children and their friends.

After retiring from Hormel, she started her second career as the volunteer kitchen supervisor for St. Augustine Catholic Church. For 25 years, she led the parish food efforts coordinating hundreds of funeral lunches, church dinners and other celebrations.

Joyce was a founding member of Austin Chapter 446 Women Of The Moose and a member of Sacred Heart Auxiliary. When she was not working in the church basement, she enjoyed spending time with family and friends, playing cards, baking sweets and preparing her famous sweet pickles. She always enjoyed a good joke, too.

For the last 10 years of her life, she was a resident of Sacred Heart Care Center. Here, the loving staff became her second family. She was profoundly grateful for their constant care.