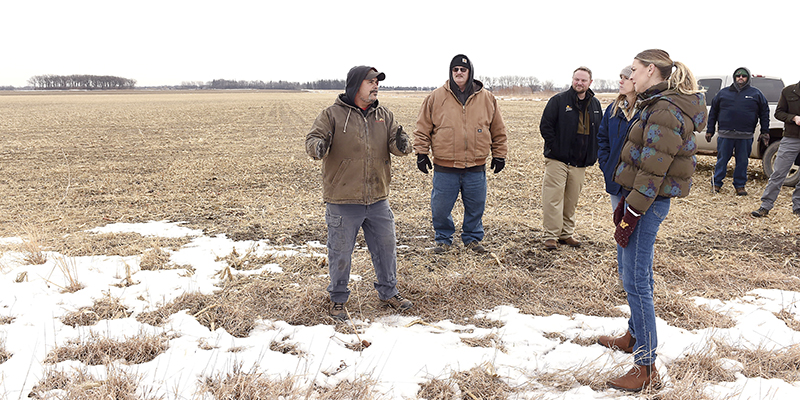 Local farmer and conservationist Tom Cotter guides a group into one of his fields to show first hand what CRP has done for him Friday morning. The tour was before the group moved to Riverland Community College to highlight the upcoming deadline for CRP enrollment. Eric Johnson/photodesk@austindailyherald.com

Officials with the Natural Resources and Conservation Service (NRCS) and the Farm Service Agency (FSA) were in Austin Friday to make a push toward getting landowners to sign up for the Conservation Reserve Program (CRP).

The deadline for signing up for this year is on Thursday, March 11.

Both the representatives of the NRCS and FSA along with members of the Mower Soil & Water Conservation District and local farmers first met at the farm of Tom Cotter to hear about how he has benefited from CRP enrollment.

After the farm visit, there was a round-table discussion held at Riverland Community College where not only did talk turn to current successes, but also to  just how valuable partnership is.

“It’s the foundation of what our work is,” said Justin Hanson, SWCD District Manager. “Every single step is critical to working together. When these guys want to take part in this program, it’s a smooth transition.”

However, for the program to truly work, landowners have to buy into it knowing there will be a benefit not only in how the land is used, but profit as well.

While the land set aside for CRP often is of a lower production value for crops, it’s still valuable.

“We see these spots that aren’t producing,” Cotter said. “It’s not that you’re not making money, you’re losing money. Why wouldn’t you lock that [profit] in?”

While there is no set goal as to how many acres FSA would like to see signed up this year, there is an effort to maintain the acres currently enrolled.

According to FSA State Executive Director Whitney Place, the goal is to stay consistent as there are 104,653 acres of current CRP land contracts due to expire this year.

“We do have over one million acres this year, but we have expiring contracts,” Place said. “We want to make sure we keep those contracts.”

However, farmers are seeing successes from enrolling their land in CRP.

“I’ve seen the difference it can make,” said local Blooming Prairie farmer Roger Peterson, who has 200 acres enrolled and has seen for himself the return of wildlife to the land. “I’ve been really happy with it.”

Likewise, Rod Moe, who has land near Waltham, said there is a win-win on both sides of the measure.

“There’s some dollars there and there are environmental concepts that are a big plus,” Moe said.

For more information on the program and to sign up, visit: www.fsa.usda.gov/programs-and-services/conservation-programs/conservation-reserve-program/