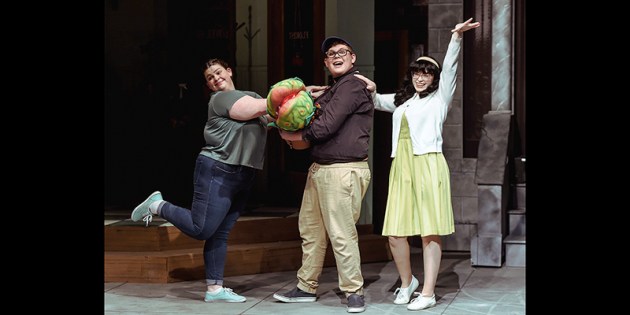 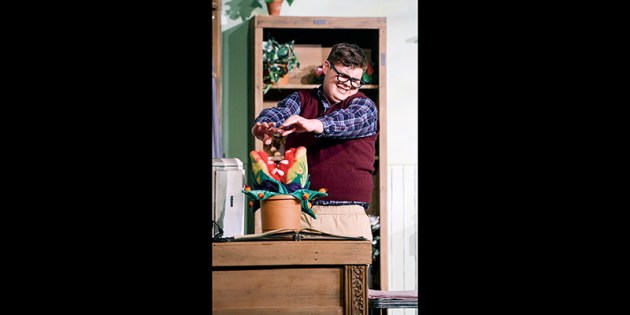 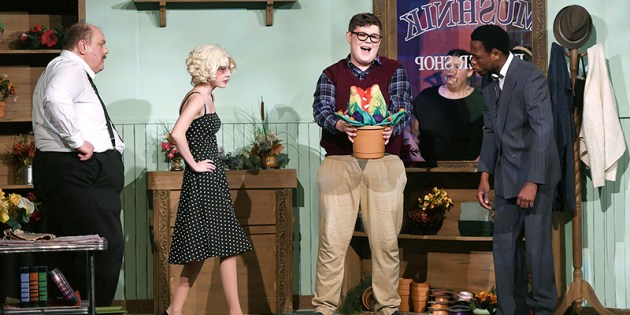 Andrew Breitsprecher, as Seymour, shows off Audrey II during one of the early scenes of “The Little Shop of Horrors,” during rehearsal Monday night at Frank W. Bridges Theatre. Eric Johnson/photodesk@austindailyherald.com 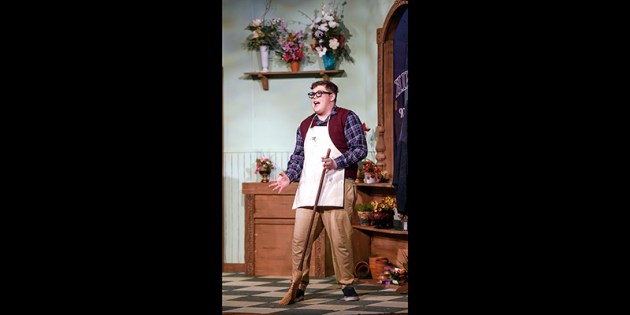 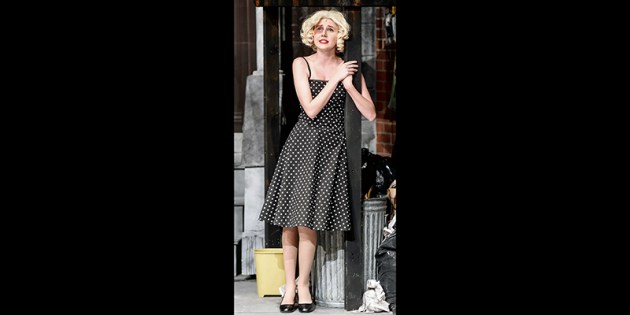 Riverland Theatre will continue its 21-22 season with the cult classic musical “Little Shop of Horrors.”

A deviously delicious Broadway and Hollywood sci-fi smash musical, “Little Shop of Horrors” has devoured the hearts of theatre-goers for over 30 years. The meek floral assistant Seymour Krelborn stumbles across a new breed of plant he names Audrey II after his coworker crush. This foul-mouthed, R&B singing carnivore promises unending fame and fortune to the down and out Krelborn as long as he keeps feeding it … blood. Over time, though, Seymour discovers Audrey II’s out of this world origins and intent towards global domination!

“Little Shop of Horrors” has a book and lyrics by Howard Ashman and music by Alan Menken. The show is based on the film by Roger Corman with a screenplay by Charles Griffith.

“It’s been 24 years since Riverland has done ‘Little Shop of Horrors,’ and so we’re excited to be bringing it back to the Frank W. Bridges stage,” said Director Lindsey Duoos Williams. “The show is enjoying a hit off-Broadway revival right now in New York, which is proof of how enduring it has been. One of the most fun things for our cast has been getting to work with the Audrey II puppets, which we rented and are similar to the original off-Broadway designs.

There are four different puppets to portray Audrey II in various stages of her growth. We have two puppeteers (Lily Martin and Ryan Flanders) who take turns playing the role, since it is so physically demanding—they are literally sitting inside the puppets, completely concealed from the audience, and syncing their movements to Audrey II’s voice, which is performed by our Technical Director, John Deyo.”

Individual tickets to Little Shop of Horrors are $16. Tickets are currently on sale at www.riverland.edu/tickets 24 hours a day, seven days a week. The online ticketing system allows customers to pay by Visa, MasterCard, American Express or Discover.

The on campus box office will be open for in person sales in the theater lobby one hour prior to each performance. Riverland students receive two free tickets with a valid student ID. Contact the box office at 507-433-0595 or by emailing boxoffice@riverland.edu.

Customer and others: Adrian Ojambo

Patrick Martin and others: Oscar Quintero-Gutierrez