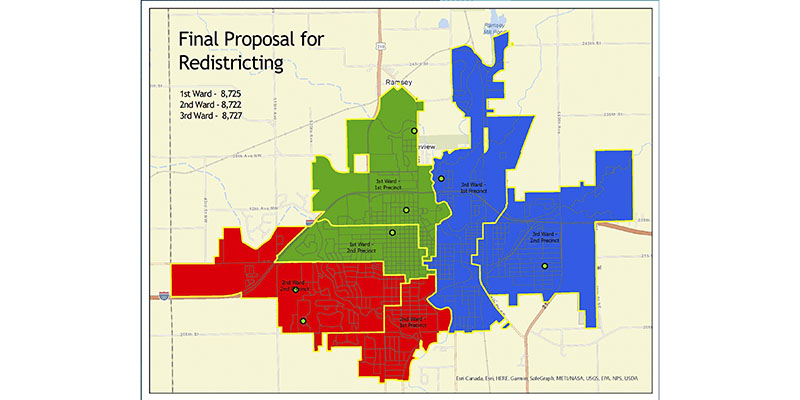 How the new Wards layout looks if finalized. Provided by the City of Austin

According to City Clerk Ann Kasel, the city’s redistricting will equal out to just about 8,725 people in each of Austin’s three wards, split up into 1st Ward (northwest Austin), 2nd Ward (southwest Austin) and 3rd Ward (the eastern half of the city).

However, when the city presented its plan to the county, an “island” was discovered in Austin Township, in the area of Turtle Creek I and II. Had the chunk of land been left as is, it would have forced the creation of a fourth district in 1st Ward.

To avoid this, a shift was created that located that portion of Ward 1 west of Interstate 90 south to be included into the 2nd Ward, second precinct.

The next steps will now include the following according to Kasel:

• Wait for the State Legislature to release their official plan;

• Adopt a resolution to redistrict the city and predesignate polling places;

•Work with the county to inform voters of new voting locations (if changed); and

Filing for the City Council begins in May.

The council approved going with Armon Architecture, Inc.  for the design of the proposed renovation.

Lang said that the entire project is estimated to come in at around $680,000 with around a nine-month construction schedule that would begin in the fall of this year and span throughout the winter and into spring of 2023.

Lang said that working with Library Director Julie Clinefelter, 11 different areas have been identified as being part of the renovation including reorientation the service desk, an outdoor area for children’s activities, and an improvement of meeting room space.