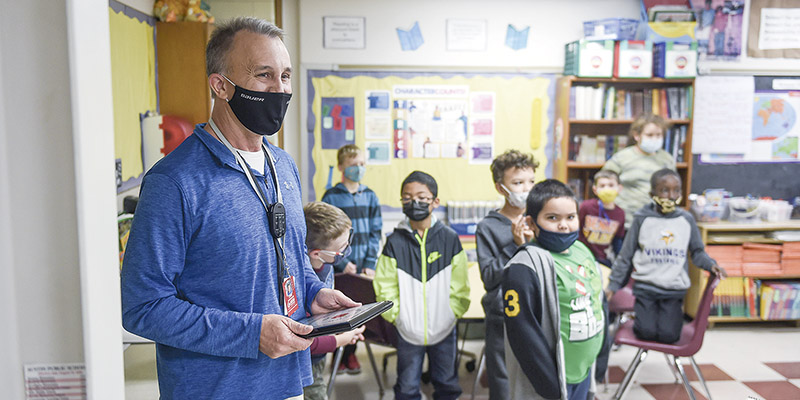 Banfield Elementary third grade teacher John Schneider is one of 25 Minnesota teachers to advance to the semifinals out of 77 candidates.

“We couldn’t be more proud of and excited for John,” said Teacher of the Year Committee Chairman David Brown. “He is a shining example of what a teacher should be. The love and respect he gives and receives from students, staff, families and community is indicative of him as a person. John is as good as they get. He 100% deserves to be a semifinalist. We can’t wait to see how much farther he advances.”

Schneider is the second teacher in four years to reach the semifinals from Banfield Elementary after Marsha Wilson advanced in 2017. He is also a part of a group of several Austin educators to advance at least as far as the semifinals. Current Austin Public Schools Board member Katie Ulwelling was a finalist in 2000.

“I am very honored to be selected as a semi finalist,” Schneider said Wednesday afternoon. “This has been a rewarding and humbling experience. I truly appreciate all of the support that I have received, and I will do my best to represent Austin Public Schools in the next round of the competition.”

Earlier in the school year, when Schneider was first announced as the district’s Teacher of the Year in November, he said that the award is also a reflection on those around him, especially during such a difficult time in the shadow of COVID-19.

An independent panel of 22 community leaders will now go back and review portfolios again as well as semifinalist video submissions from early in March to select the 10 finalists.