Athletics pull off a roller coaster win over Falcons 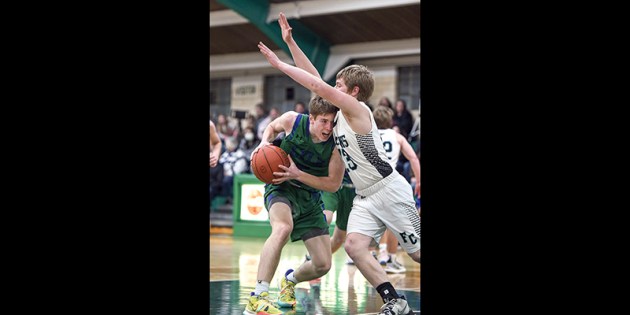 Lyle-Pacelli’s Mac Nelson leans into Fillmore. Central’s Dillon O’Connor during the second half during the opening round of the Section 1A Tournament Thursday night at Pacelli. Eric Johnson/photodesk@austindailyherald.com 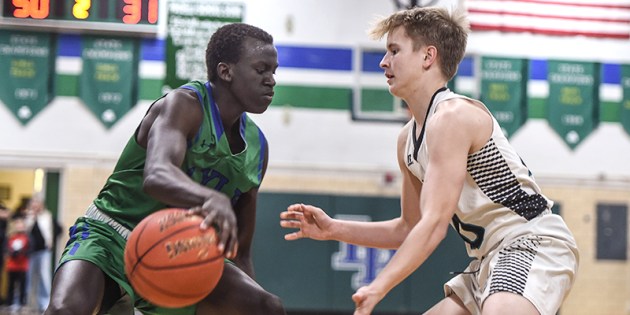 Lyle-Pacelli’s Buay Koak controls the ball on the corner aginst Fillmore Central’s Chase Christianson during the second half Thursday night in the first round of the Section 1A Tournament at Pacelli. Eric Johnson/photodesk@austindailyherald.com 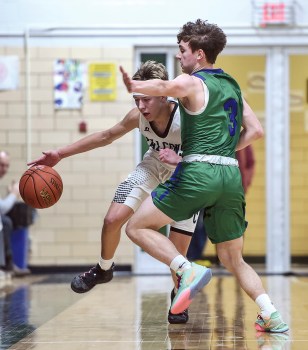 Lyle-Pacelli’s Trey Anderson defends against Fillmore Central’s Jayce Kiehne during the first half of their first-round Section 1A Tournament game Thursday night at Pacelli. Eric Johnson/photodesk@austindailyherald.com

The No. 6 seeded Athletics saw a 25-point lead disappear, but they were able to stay on their feet and deliver a knockout blow as they outlasted No. 11 Fillmore Central 78-70 in a Section 1A Tournament opener in All Saints Gym Thursday.

The Athletics (23-4 overall) opened the game on an 11-2 run and held a 46-21 lead late in the first half, before the Falcons burst back into the game. FC opened the second half by out-scoring L-P 29-12 and grabbed a 64-63 lead when Dillan O’Connor made a baseline three-pointer with 5:28 left in the game, but that was the only time the Falcons (9-18 overall) would lead.

“We played lights out in the first half and then I switched it up on defense,” L-P head coach Carl Truckenmiller said. “We probably should have stayed in man-to-man defense because they have some good shooters. We got a little crazy with the atmosphere and we had some looks, but they just didn’t go.”

“That late in the game, you’ve got to chase rebounds and I was trying to be aggressive and make plays,” said Nelson, who finished with 17 points, eight rebounds and three assists.

Buay Koak dominated the paint in the win for L-P as he tallied 30 points, seven rebounds and seven blocked shots. He and the Athletics were able to keep their cool down the stretch in a frenzied atmosphere as the Falcons committed a flagrant foul and a technical foul in the closing seconds.

“We had to keep our composure, not listen to the crowd and just get it done. Because they’re not going to get it done for us,” Koak said. “We struggled with communication in the second half and we didn’t find their shooters. We got back to talking on defense and that helped.”

L-P received solid balance from its starting five in the win as Jake Truckenmiller added 19 points.

“We had great minutes from David Christianson off the bench,” L-P head coach Carl Truckenmiller said. “He drew three charges, which were huge. Offensively, we had Jake running the show, Buay is the show and Mac played a great game tonight.”

L-P will play No. 3 Goodhue in Mayo Civic Center in a Section 1A quarterfinal at 7:30 p.m. Wednesday.

“I’m super excited to play Goodhue,” Carl Truckenmiller said. “They slow it down with the 2-3 zone and we play fast and on the verge of being out of control.”