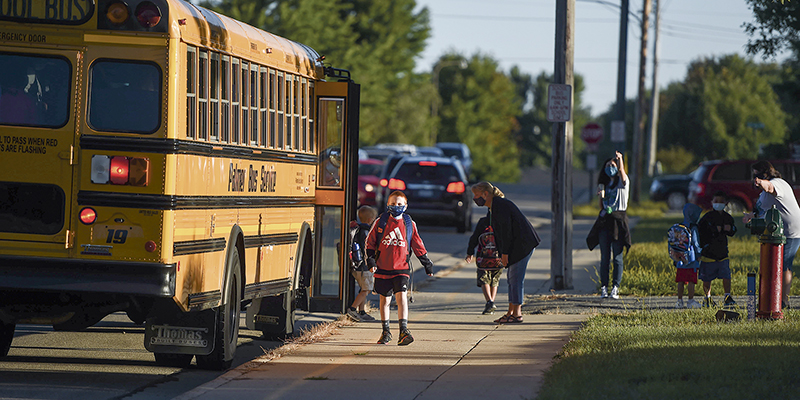 Teachers help students figure out which doors to go in after getting of their bus on opening day in 2020 at Southgate Elementary School. Herald file photo

In an email to parents Friday afternoon, Austin Public Schools Superintendent Dr. Joey Page announced that the district’s Bell Time Study is completed and that changes to busing schedules are close to being finalized.

The study was commissioned to address issues with busing experienced at the beginning of the year, that included among other things, students facing incredibly long ride times.

During a February board meeting, Benjamin Davis, routing lead with the Center for Effective School Operations (CESO) out of Minneapolis, informed the board that he discovered that the longest ride for a student in the morning logged in at 90 minutes and was elevated up to 113 minutes in the afternoon.

Some of this was due to a driver shortage Palmer Bus was facing brought on by the COVID-19 pandemic, similar to what busing companies were experiencing across the state.

“I cannot laud Palmer enough for what they’ve accomplished with this,” Davis said during the meeting.

However, at the same time he also pointed out that Austin was not using an optimal busing plan.

“Some of that has to do with how convoluted the transportation situation really is,” Davis had said. “The system, I believe, isn’t friendly enough as a transportation system in order to garner the ridership we would like to see.”

In Friday’s letter, Page spoke to this issue in explaining why the study was undertaken.

“We needed to get a better picture of exactly what was happening and what was going wrong to make better decisions about how to get students to and from school,” Page said. “This exhaustive study gave us a clear picture of our bussing system and where it was falling short while offering some recommendations about how we can improve this for our students.”

With the study over, the district has committed to reaching 12 goals. Examples of these goals are:

• Clearly communicate bus routes and times to parents and caregivers;

• Limit grade level spread per bus as much as possible; and

The letter noted that a recommended schedule for busing has been reached and will be considered by the board around April 11.

“We’re looking forward to a better busing system to make transportation as easy as possible for our students and families,” Page said.

Click here to get a rundown of the study.