Another way to give: Oballa Oballa starts fund using his salary from City Council 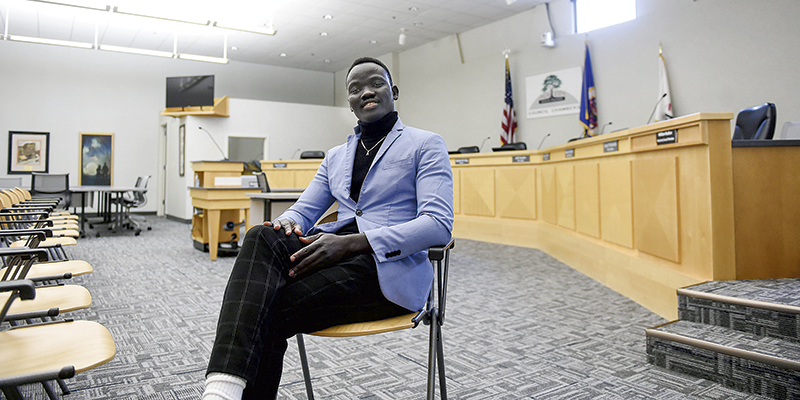 Oballa Oballa has recently kick-started the Oballa Fund, which through the Austin Area Foundation, will grant non-profit organizations funds in support. Eric Johnson/photodesk@austindailyherald.com

By his own admission, First Ward Council Member Oballa Oballa wasn’t aware that he was paid for his time on the City Council, but after his first few paychecks, he became certain of what he wanted to do with some of the around $9,000 in yearly salary. Give back.

“The second check came in. I was thinking I wanted to give back to the community,” Oballa said. “My public service is something I’m so grateful for and I was looking for some way to give back.”

Oballa has created the Oballa Fund, a philanthropic service that once ready will give out grants and support to non-profit groups in Austin. The fund is set-up through the Austin Area Foundation, a perfect entity to help Oballa distribute the funds through his continuing mission to serve the community he calls home.

The way the fund is set up, is that it has to reach the $5,000 mark before grants can be extended to organizations like the Salvation Army, for instance. To that end, Oballa is donating 33% of each City Council paycheck he receives as well as taking in any donations from the public that wish to support the Oballa Fund.

Oballa is hoping that by 2023 that $5,000 goal will be met and can begin distributing grants.

“This is what brought me on the council. Just serving,” Oballa said. “I didn’t come in for the money, but when I saw the money I thought, maybe someone needs more than me.”

Oballa has a long-standing tradition of giving back and has been instrumental with supporting things like the Riverland Community College food pantry, something he took great pride in when he himself was attending RCC.

He hopes in the long run that the work of the AAF and Oballa Fund could open up new avenues of giving for others.

“I think this is something that will open more ways in the Austin community for those that have been helping,” he said. “There are so many people who want to help Austin. Some, they don’t know that maybe they can help through the Austin Area Foundation.”