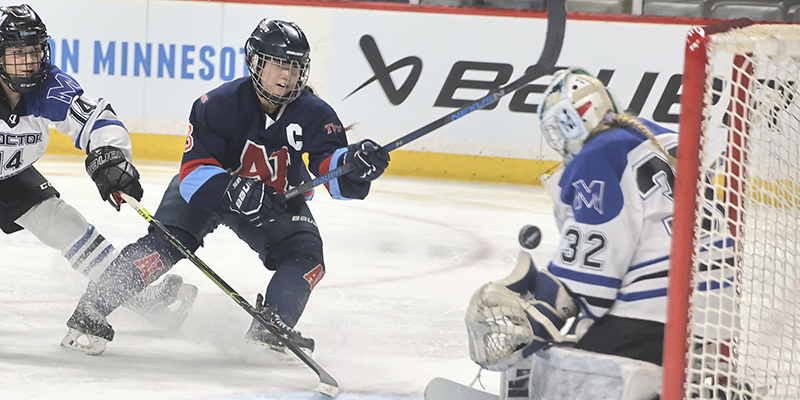 The Albert Lea girls hockey team wasn’t able to find its offensive groove, but it was able to stay in the game for most of the day as it lost to No. 3 seeded Proctor-Hermantown 6-2 in the Minnesota Class A State Girls Hockey Tournament quarterfinals in the Xcel Energy Center Wednesday.

The Tigers have a young roster that features just two seniors and no juniors, so the experience is sure to light a fire under the team for years to come.

“It was a good time. We knew Proctor-Hermantown was going to be a tough team and they have a real good goalie too. We knew what we were up against,” AL head coach Mark Goskeson said. “It’s a big experience for us. Going forward, we know we can make it here and we know we can play here. Maybe some of the nerves will be gone next time. It’s nice being comfortable.”

AL (14-11-1 overall) reached the scoreboard halfway through the second period when Liley Steven scored to pull the Tigers within 4-1, but P-H’s Nya Sieger scored a short handed goal just four minutes later to make it 5-1.

The Tigers were outshot 17-4 in the first period, but were able to stay within 2-0. AL did have one shot in the period that was stopped by the skate of P-H goalie Abby Pajari.

P-H’s first goal came on a delayed transition attack when Sieger took a pass from Jane Eckstrom and put it through with 10:25 left in the first period.

PH (20-7-1 overall) took a big lead when it nailed two goals in the first three minutes of the first period to go up 4-0.

Tigers starting goalie Rachel Doppelhammer stopped 26-of-30 shots for the Tigers and Jayda Moyer saved 21-of-23 shots in relief.

“I played both of them so they could each take on some good shots,” Goskeson said.

The Tigers were able to reach their first-ever state tournament by defeating Interstate 90 rivals Austin, 7-2 last Thursday in Owatonna. They will now play Mankato East, who lost to Orono 7-1 earlier in the day, in the consolation round at 10 a.m. Thursday at TRIA Rink in St. Paul. The Tigers lost in the team’s only regular season meeting, 4-1 in December.

A win would put them in the consolation championship to be played at 10 a.m. on Saturday at TRIA.