Under pressure: Athletics close out a win in Grand Meadow 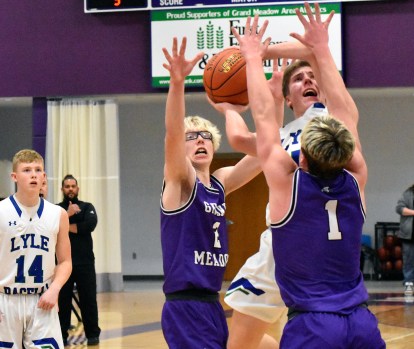 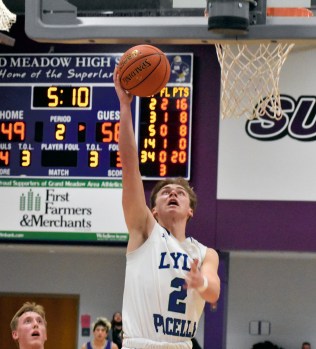 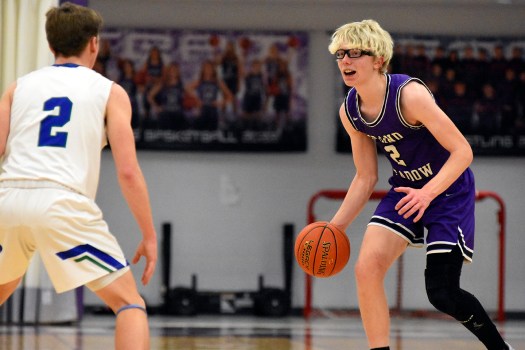 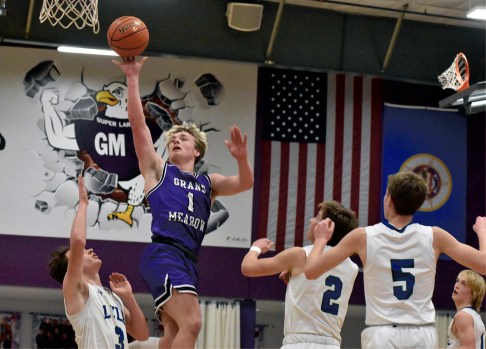 Taylor Glynn attacks the hoop for the Superlarks in GM Friday. Rocky Hulne/sports@austindailyherald.com 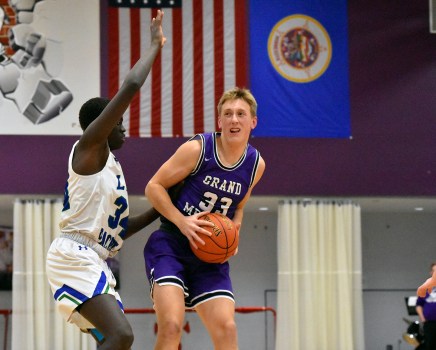 GRAND MEADOW — Things may have gotten a little bit tight down the stretch, but the Lyle-Pacelli boys basketball team was able to finish off Grand Meadow in the final minute as the Athletics prevailed with a 70-61 victory Friday night.

LP (14-3 overall) held a comfortable lead for much of the second half, but the Superlarks stormed back into the game when Jace Kraft hit a three-pointer to make it 60-54 with 3:08 left and Kraft converted a three-point play to make it 64-61 with 55.3 seconds left.

LP junior Buay Koak had a big response when he drove to the hoop and drew contact from GM senior center Roman Warmka. Koak absorbed the contact from Warmka and he scooped a circus shot with his right hand to score while drawing the foul. Koak sank the free throw to put his team up 67-61 with 51.7 seconds left.

“It started to get scary at the end when they cut it down to three,” Koak said. “I knew I had to attack, because that’s what we have to do at the end of the game. I knew he was going to make contact so I had to go up strong and just finish the shot and finish the game.”

Koak finished with 29 points and eight rebounds after an emotional week for the LP boys basketball team. The Athletics had their game that was scheduled on Monday due to a death within the Pacelli school district.

“I was motivated because one of our teachers passed away this week,” Koak said. “I had him on my mind. He always supported us at the games and I knew he would be here.”

LP head coach Carl Truckenmiller wasn’t sure how the week would affect his team, but he was happy with how the Athletics played as they forced 16 turnovers.

“We had great pressure tonight. We didn’t know how we were going to come out because we had a week off after (what happened) Monday,” Carl said. “This was a great team effort. Buay and Jake (Truckenmiller) were great on offense and Trey Anderson did some good things for us.”

Jake spearheaded LP’s pressure defense as he finished with 20 points, seven rebounds, seven assists and six steals. He did most of his damage in transition.

“We were getting their hearts racing a little bit,” Jake said. “The pressure got to them and we turned those steals into points.”

After playing the role of sixth man on a senior heavy team last year, Jake has emerged as a leader alongside Koak this season. He has been more vocal, more involved and more successful.

“I always knew Jake could do it,” Koak said. “Now he’s showing leadership and taking over games. I’ve really enjoyed seeing him grow as a leader and as a friend.”